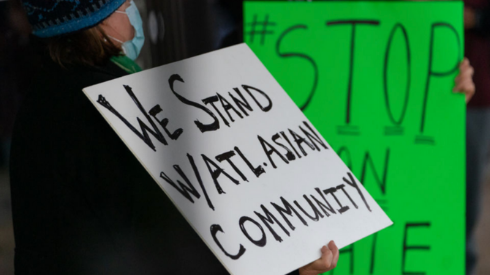 A unidentified person hold a sign in support of the AAPI community. GoFundMe photo

San Diego Community College District Chancellor Constance Carroll issued a statement in support of the Asian American and Pacific Islander community after a series of mass shootings in the Atlanta area.

“The San Diego Community College District (SDCCD) strongly condemns recent acts of hatred and violence directed at members of the Asian -American and Pacific Islander (AAPI) community,” Carroll wrote. “The District reaffirms its commitment to the safety and well-being of AAPI community members and assures them that they are not alone.”

The latest developments can be seen in this week’s episode of Newscene, the award-winning student-produced weekly newscast.

Among the eight dead are six Asian women, their ages ranging from 33-74. The sole survivor of the attack remains in intensive care. To learn more about the victims, click here.

This has led many to discuss if hate crime charges are warranted against the suspected shooter.

“It looked like a hate crime to me,” Bottoms told CNN. “This was targeted at Asian spas. Six of the women who were killed were Asian so it’s difficult to see it as anything but that.”

Investigators say that more evidence is needed to determine if hate crime charges can be brought against him. The shooter was arrested and charged with murder.

A series of GoFundMe pages have been created to support the victims of the shooting and AAPI causes.

The vaccine was previously suspended in 13 countries due to concerns with blood clots.

The European Medicines Agency concluded that AstraZeneca is not associated with the risk of blood clots and the benefits of the vaccine outweigh any possible side effects.

The Padres need their stadium back as baseball season begins. Opening day is set for April 1.

A spokesperson for UC San Diego Health said it hopes to get anyone still waiting for a second vaccine dose at its site by the end of the week.

Play in the 68-team tournament began yesterday and leads to the Final Form, which will be played April 3 and 5 at Lucas Oil Stadium.

Day grew up in San Diego, graduated from San Diego School of Creative Performing Arts and started her career at a local Chula Vista church. She was nominated for best actress.

The 93rd Academy Award nominations were announced Monday. Check out the full nominations ceremony below.