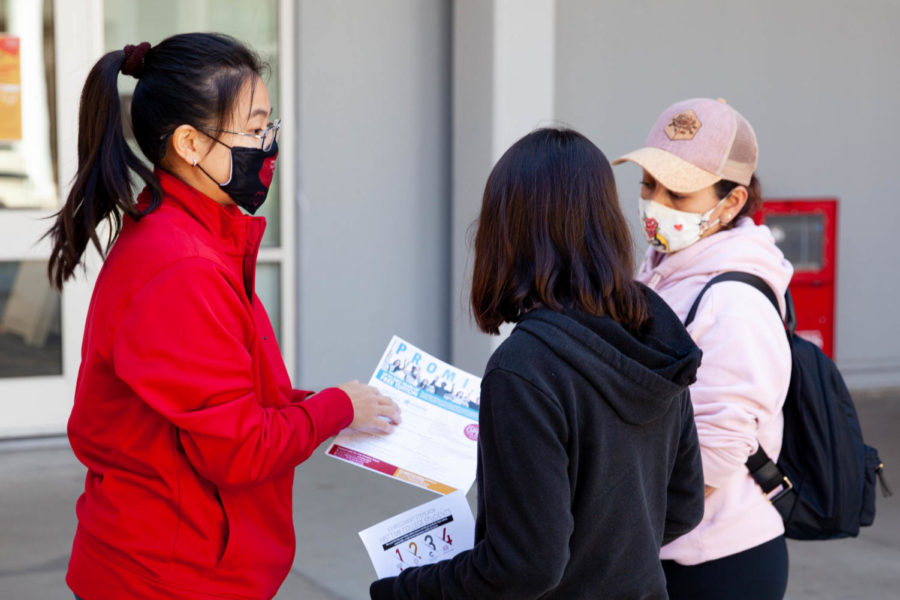 At the San Diego City College Welcome Center, Thao Chung (left), student outreach representative, welcomed prospective student Ariana Lopez with information about the college while Wendy Nieto looked on. The prospect of bachelor’s programs at City may take some years to materialize, but may significantly impact the decision making of students in the future. Photo by Philip Salata/City Times Media

At a time when the cost of college, and student loan debt, continue to rise exponentially, putting a college education out of reach for many, California has approved a change that may help to expand access to 4-year degrees.

But not as soon as you may hope.

The original bill SB-850 was sponsored by former state senator and SDCCD Board of Trustees President Marty Block. It authorized up to 15 community colleges to establish baccalaureate programs beginning in 2014.

AB-927 allows 15 community colleges per semester, a total of 30 per year, to develop new baccalaureate programs as long as they meet certain requirements.

Those include proving new programs would help fulfill unmet workforce needs. An associate degree in the field must also be offered and the bachelor’s cannot already be offered by a UC or CSU school.

According to information released by Mesa College, which developed a bachelor’s in Health Information Management through the pilot program, the price amounts to around $10,500 for all four years.

That’s $2,070 less than a single year of tuition at a University of California school, before fees.

Mesa President Pamela Luster said many graduates of its program earn nearly six figures as soon as they enter the workforce, and do so without any student loan debt.

“So that to me is where the value proposition is here,” she said.

In a report evaluating the effects of the pilot program, California’s Legislative Analyst’s Office found students who graduated from these 4-year programs saw salary increases between $12,000-28,000.

As the need for workers with bachelor’s degrees increases, Luster said community colleges could play a crucial role in making those degrees more accessible to students who could not afford them otherwise.

Luster also emphasized how vital it is to ensure these affordable degree programs target the needs of existing students and the local labor market, as well as translate into higher-paying careers for graduates.

“I think it’s really important for (community colleges) to continue to be the equitable sort of Ellis Island of higher ed,” Luster said. “We should be building baccalaureate programs for those students for whom a baccalaureate isn’t possible except for through us.”

She also advocated for district-wide coordination, saying she’d like for Mesa to be able to help other SDCCD schools develop proposals for baccalaureate expansion.

“We’re ready to help Miramar and City,” Luster said. “We have solved so many of the problems that would have been in people’s way. I think we’ve cleared a lot of it, but we haven’t really talked to each other about it district-wide because there hasn’t been the opportunity.”

City College President Ricky Shabazz stressed it was still very early in the decision-making process and any proposals would ultimately need to be faculty-led. But suggested some combination of the Homelessness Program for Engaged Educational Resources (PEER) course, and the Alcohol and Other Drug Studies (AODS) program may be an option for baccalaureate expansion.

Jen Boots, chair of City’s curriculum review committee, said much was still unknown regarding the specifics and flexibility of the requirements stipulated in the new law, but warned creating new curriculum and degrees was a lengthy and arduous process that usually takes years.

Boots said a number of programs had initially expressed interest, but the work required to create a proposal, and the stipulations of it, narrowed down the pool. They currently had what she described as strong proposals from graphic design and cybersecurity, two programs that already offer associate degrees.

She’d been advising programs on crafting their proposals using guidelines laid out for the pilot program but said she expects a workgroup that would help oversee the process to be finalized in the coming weeks.

Former SDCCD Chancellor Constance Carroll has long been a proponent of this policy and even founded the California Community College Baccalaureate Association, which aims to provide information, technical assistance and professional development to community colleges interested in developing bachelor’s degree programs.

“This has been a major effort for the past seven years of my life,” Carroll said. “To see our dream finally realized has been a very, very moving experience for me and also a source of great relief.”

Current SDCCD Chancellor Carlos Turner Cortez said it was wonderful news and something the district had been at the forefront of advocating, citing Block and Carroll’s involvement in the movement.

“We are the nucleus of this movement (in California),” Cortez said. “Our district, and our four colleges, and myself are beyond excited about this development.”

Shabazz also supported the change, saying he felt relieved the governor had done the right thing but that it was long overdue. Cortez and Carroll echoed this sentiment, saying California — usually an innovator and trendsetter — was behind the curve.

With the passage of AB-927, California became the 25th state to extend the ability to offer bachelor’s at community colleges. That list includes Republican-led states like Texas and West Virginia, as well as Democratic-run states like Oregon and Washington, highlighting the bipartisan nature of this movement.

AB-927 passed unanimously through the California state assembly and senate.

“I think you’ll find that there aren’t many issues that Republicans and Democrats agree upon,” Cortez said. “Community colleges are one.”