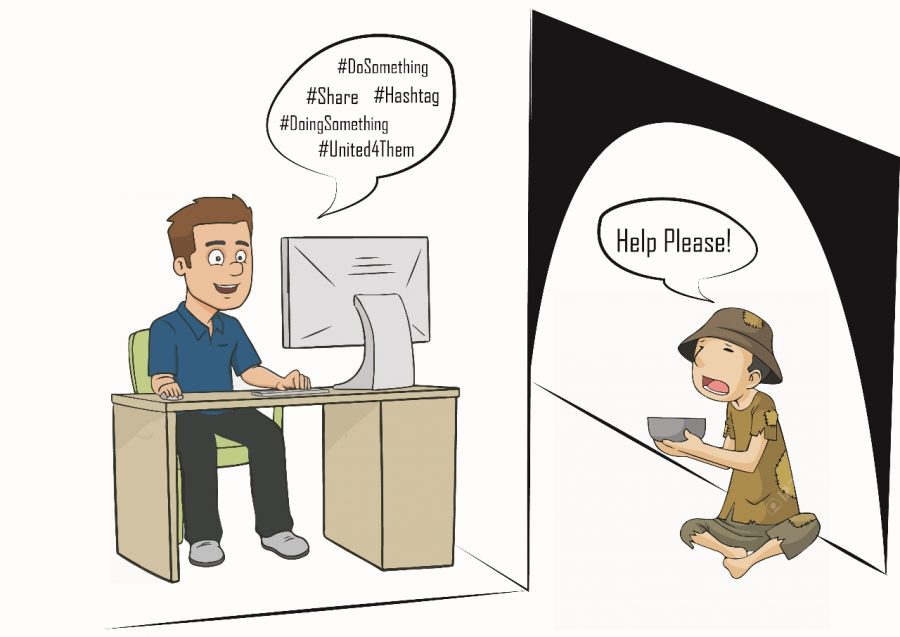 If you’ve seen anybody wearing a safety pin recently, it means that they’re supporting race and sexual minorities in America who have been victims of hate crimes after Donald Trump became the president-elect.

Some people in America, and even people around the world, are giving the smallest bit of help they can toward a cause, but still feel like they’ve done enough to help those who have been oppressed. Americans are guilty of this and that can be attributed to the rise of social media in the past ten years.

Going to social media isn’t going to solve any of America’s problems.

According to Statista.com, 78 percent of people in the U.S. are using social media in 2016, a 5 percent increase from 2015. A little more than three-fourths of Americans use social media, many to “support a cause.”

This isn’t the first time that people in America have resorted to such “passive protesting,” if that’s what you want to call this.

One example is when Facebook created a “Paris filter” that could be used for any photos posted on the website in the wake of the 2015 Paris bombings. Any photo that had the filter applied to it would show a transparent background of the French flag. This was created so people using the website could “… easily show their support for France,” according to Mashable.com’s, Adario Strange. If that’s considered showing support, then Americans and people all over the world need to investigate what real activism involves.

Another example is when Instagram promoted its “Ice Bucket Challenge” in 2014 for ALS. This challenge involved a person filming themselves pouring a bucket of ice water on themselves. Researchers have found new information on ALS and it was apparently because of the outpouring of support during the 2014 Ice Bucket Challenge, according to ALSA.org.

The newly discovered information wasn’t because of people pouring ice water on their heads, who, by the way, felt they were contributing as much as they could to  people suffering from this disease; the new information was because of all the time scientists and doctors spent, around-the-clock, researching ALS.

Now the “Paris filter” and the “Ice Bucket Challenge” might be good ways to spread awareness of a certain situation, but being aware of a situation and actually doing something about it are two totally different ball games.

Consider what Martin Luther King Jr., and his followers did during the Civil Rights Movement of the 1960s with their march from Selma to Montgomery, or their sit-ins to protest whites-only diners.

That’s what real activism involves; getting up and fixing, or at least helping to fix, something you perceive as unfair and broken.

A true activist knows that he or she will most likely step out of their comfort zone to support a cause that they truly believe in. Martin Luther King and his followers knew how to stand up and fight for their beliefs even if that meant getting hurt.

So why did people of our generation stop trying? What’s the reason for this level of inaction that’s taking a hold on this generation?

I can’t understand it myself but there is one thing I’ve learned from seeing my generation do this. It’s that choosing a silly little filter to put on a picture doesn’t stop the bombings. Posting videos of dumping cold water on yourself doesn’t heal anyone any faster. And wearing a safety pin isn’t going to bring this nation together.