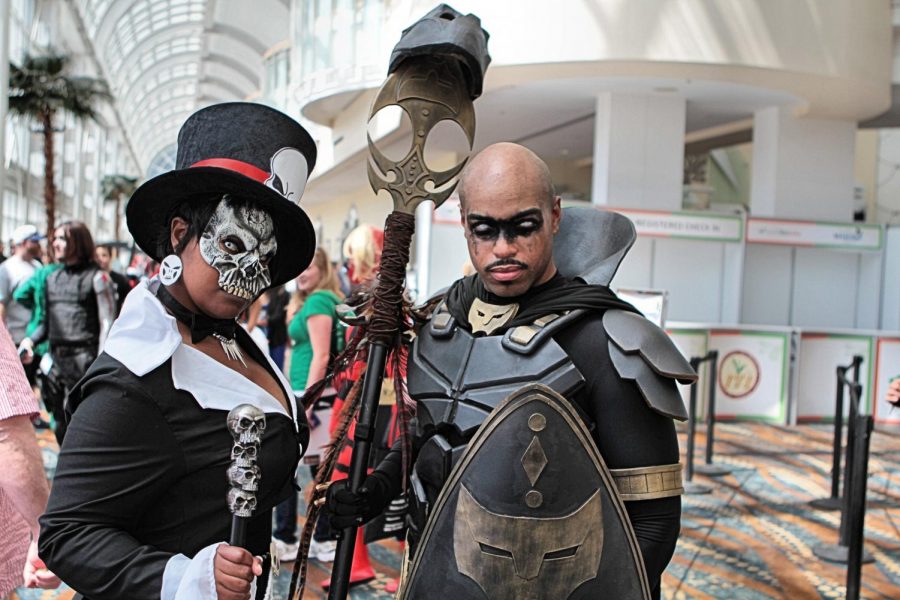 Doctor Facilier and Black Panther from Cosplay at Long Beach Comic Expo 2014. Black fans exist and Hollywood should be courting that audience as much as they cater to other audiences. Photo courtesy of Flickr

Towards the end of “Marvel’s Black Panther”, I was fighting back tears. You see,  Hollywood is racist; it has for centuries depicted my people, black folks, as slaves, thugs, illiterates and lost souls in search of a superior white intellect for salvage.

It has emasculated my brothers and fetishied and demeaned my sisters, it has filled young children with more self-esteem issues than an entire course of slavery taught at a underfunded, inner-city school ever will.

Not with “Black Panther”, I made a realization a few days after seeing the movie, that this movie will be the first film that young black boys and girls would ever see and upon that realization, I broke down and cried.

I never had this movie growing up, I never a had high concept blockbuster that celebrates African culture and uplifts my face and ethnic background.

This movie exists in an era where the media is constantly reporting of Black men getting shot by police and when a movement has to make the world see that we are human and valuable.

Hollywood has been regurgitating these images of us as being poor, underprivileged, tossed aside and helpless and then goes on to reward these images and films, by praising them with Oscars and accolades.

The first person of color to ever win an Oscar was Hattie McDaniel, who won in 1940 Best Supporting Actress for playing, to put it quite blantalty a mammy figure, and her character’s name was in fact Mammy. A black women stereo archetype that was a heavy presence in modern life at the time, and then to be rewarded on screen.

Hollywood has poisoned my mind and many other black children and adults with shame of their skin color, by only rewarding our culture for being depicted as savage and ruthless and unintellegenable. Rarely do we ever get to stretch our wings and fly on screens as millions of others watch.

When Hollywood is gracious to give us our chance, at say a superhero film; “Meteor-Man”, “Blankman”, “Hancock”, or “Catwoman”, the very idea is treated something a comedy. “Meteor-Man” and “BlankMan” reinforce Hollywood’s non interests in seeing black folks represented in kind so much that is has to relegate the notion of black male superhero to be the but of repeated punchline.

It has to scoff at the idea of a black woman being a hero and the only way it will see to the mainstream (White audiences), is if sees a sex object for majority of that films egregious runtime.

There has been a repeated push by women and people of color in the industry to change the rhetoric that Hollywood has been dismissing for centuries, that representation of Blacks, Latinos, Asians and women don’t matter, that our stories don’t sell to mass markets, that we are not viable for larger scale entertainment.

It is here in this film that we don’t see the repeated thematics of African countries and cities living in poverty, in Black Panther they live in peace and flourish. This gives images to black folks of hope and confidence because it’s uplifting and unlike anything we’ve seen.

All the thanks in the world goes to the prophetic genius of “Black Panther” visionary director Ryan Coogler, who traveled all the way to the motherland of Africa, by himself, in preparation to bring a realism and truth into this project.

The reaction to this have been, church groups, youth groups, schools and celebrities buying out theaters to show this film to young kids to let them know and understand there’s more to them than just being targets for police, or being marginalized by our government.

This film resonated with me because it was the first time where I can see a film celebrate a culture than I’m cut off from experiencing not only because of the vast distance, but because of the centuries of cultural destruction that my ethnicity has been subjected too. There it was on the screen true for all to see and it’s something beautiful and tangible.