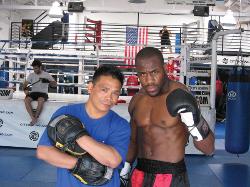 “People that come in don’t have to worry about us shutting down.”

De La Sancha has been the day-to-day business manager for City Boxing for three years, while Dion operates as more of a promoter for the fighters from his gym.

City Boxing offers boxing, muay thai (thai kickboxing) and jiu jitsu, with more of a focus on boxing than other gyms.

De La Sancha said the increased interest in mixed martial arts and UFC-type offerings has led to more popularity among training gyms. He is quick to point out that City Boxing was the forerunner.

“(At first) there was just us. People that have other gyms have worked for Mark.”

Chatman, who won the title last November, even wore the championship belt to campus for about a week. He said some people didn’t believe that he won it and those who did believe him wanted to see it.

“I was just proud,” said Chatman. He no longer wears the belt around campus but insists that the pride that goes along with winning it still remains.

De La Sancha adds that new students just need to show up twice a week and he takes care of the rest.