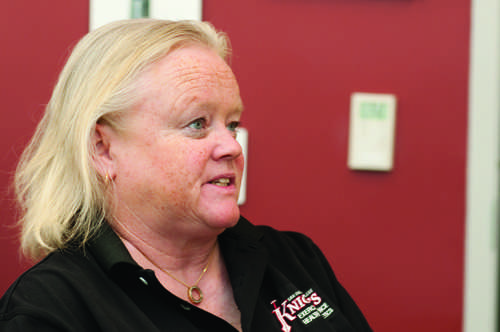 Dean of Athletics Kathy McGinnis talks about her plans for the season.

Dean Kathy McGinnis has a very hands on and involved approach to her job. In charge of overseeing all of San Diego City College’s t sports programs, it is her responsibility to make sure everything runs smoothly.   “Athletics teach people the necessary life skills needed in life. Someone who has been a student athlete has better grounding to excel,” McGinnis said.

Excelling and dominating over opponents is what the City Knights have become known for in the Pacific Coast Athletic Conference.  McGinnis is the head of an athletic department that has produced one state championship badminton team, one PCAC Title holding men’s basketball team and numerous league Athletes of the Week. Not only have City student athletes received praise, but their respected coaches have earned acknowledgements as well.    Men’s basketball coach, Mitch Charlens received the title of Coach of the Year. Men’s soccer coach, Milton Hidalgo also earned the Coach of the Year award. With McGinnis at the head, the City athletic programs run like well oiled machines.

Funding and maintaining a profitable budget is the biggest issue facing City sports.

“We fundraise as much as possible but it’s still an issue,” McGinnis said.

Supporting 13 traveling sports team means quite a bit of money is spent on expenses. Many of City sports programs do not charge admission, meaning that students should feel free to support their fellow classmates on game day. Even the programs that do charge admission, such as men’s basketball, allow students to get in free of charge if they wear City apparel. Student attendance at games is appreciated because it adds to the home field advantage.

McGinnis also oversees the school’s National Girls and Women in Sports Day. The program was started in 1990 to motivate young women to participate in sports. By the time young girls reach the eighth-grade, many of them have lost complete interest in sports. So in order to reignite the competitive soul in young women, National Sports Day was established to bridge the gap between young girls and collegiate aged athletes. Girls from several elementary schools in San Diego County are bussed in, and McGinnis, along with other female leaders, engage them in clinics.

“It’s an all day event with four different clinics,” McGinnis said. Proceeds from the event go to funding for the San Diego Breast Cancer Walk, The City College Food Pantry and many more charities.

“We’re all about quality not quantity,” McGinnis said.

By maintaining an athletic department that not only serves City, but all of San Diego, McGinnis serves her community wonderfully. The lessons and values that are instilled into City student athletes prepares them to not only excel on the field, but in corporate America, as well.