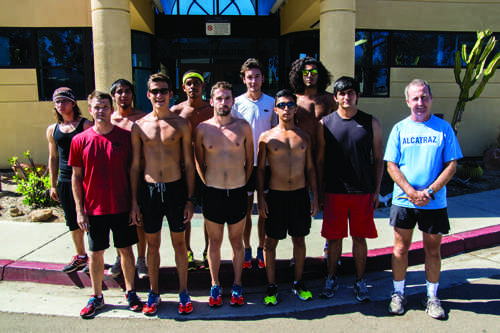 Men’s cross country coach Paul Greer has high hopes for his team this year.  He and assistant coach Peter Gregory have spent the last five years building what they hope will be the best team they have ever had.

Led by top runner and team captain Andrew Beckner, the current team is good enough, in Greer and Gregory’s opinion to name them “the dream team.”

“When people think of cross country, they think of it as an individual sport and it’s not.  There’s very much a team aspect to it,” Greer told City Times in an interview.

Team cross country races are scored on the team’s top five runners.  A lower score is better, just like in golf or bowling.  A perfect score is 15, supposing one team has individual runners that finish 1st, 2nd, 3rd, 4th and 5th in the same race.

“The scary thing is we just have five guys,” Greer said in reference to runners on the team consistently score in competition.  “Right now if one of the guys doesn’t come through, we don’t live up to potential.”

For example, Greer talked about the Foothill Invitational in Ontario, CA, on Sept. 29.  City came in 6th out of eleven teams because one of it’s runners suffered a cramp and was forced to stop for 2 minutes to recover.

“We would have finished 4th that day as opposed to 6th if that one runner had been able to hold it together,” Greer said.  “And that’s why you’re only as good as your fifth runner.”

Winning and competitive spirit are only part of the equation of coaching a team, according to Greer.

“Sure, we want to run well.  Sure, we want to win championships.  But my goal here is they transfer on to a four year university and continue their education and get a degree,” Greer said passionately about his job as coach.  “That is first and foremost my obligation to them.  Second is winning the championships.”

Greer also said it is sometimes difficult to get good runners to enroll at City because City does not have track and field.  This is part of the reason, according to Greer, that Mesa College has been City’s biggest adversary for the past 6 or 7 years.

“Cross country is not an Olympic sport but track is,” Greer said.  “That’s why we look for kids that are just hard working and live to their full potential.”

Men’s cross country ran in the San Diego Invitational at Mission Bay Park on Friday, Oct. 5 and will compete next at the Santa Barbara Invitational on Friday, Oct. 12.  The last chance for a current member of this year’s men’s team to qualify for a State Championship will be Friday, Oct. 12 at Balboa Park during their final Pacific Coast Conference competition.