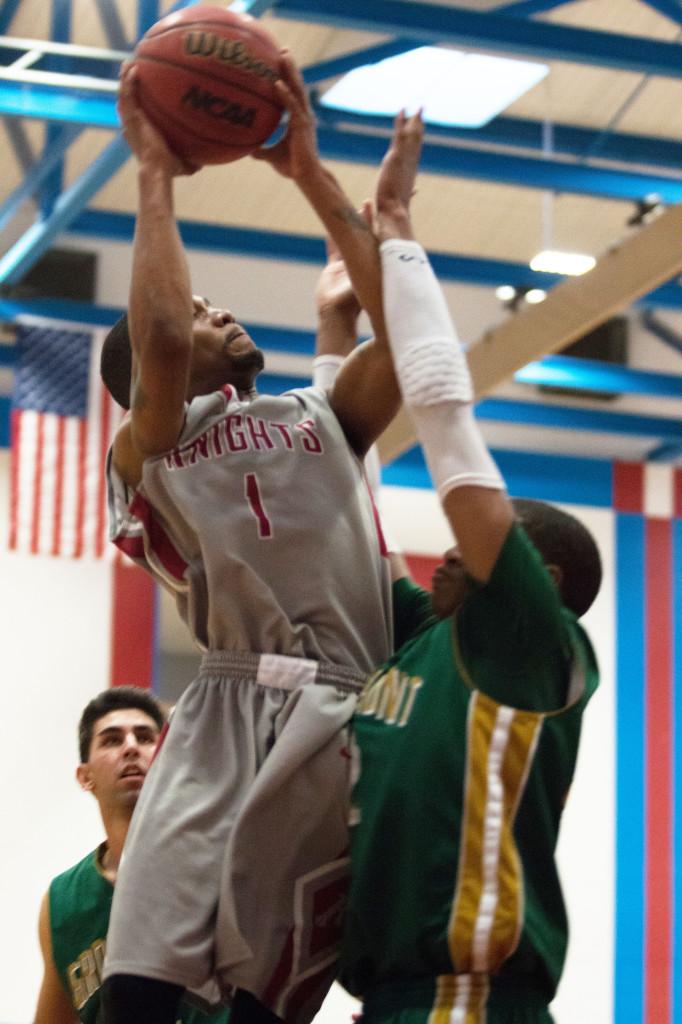 The 88-71 win over the Southwestern Jaguars Feb. 21 brings the Knights to 20-8 and 8-0 in the Pacific Coast Athletic League (PCAC) South, but the toughest challenges lie ahead.

“I told our guys, every team we play next week is a really good team,” explained Head Coach Mitch Charlens. “They have either won or they’re number two in their conference.”

In Charlens’ ten years with City, this is his first undefeated season, and the coaching staff and players both credited each other for their success.

“I think it’s the fact that they really figured out how to play together and it’s a lot of fun,” stated Charlens.

However sophomore point guard Martin “Pooter” Thomas was quick to reciprocate by praising the coaching effort.

“If it wasn’t for them, we wouldn’t be one. We wouldn’t be a whole,” asserted Thomas. “It takes two, so as we progress, they progress too.”

Thomas leads the PCAC with 134 assists, who also ranks highly in the state.

“Pooter is eleventh in the state in assists for two reasons: One, he’s really unselfish and he’s a pass-first point guard, and two, we’ve got guys that can really score the ball,” stated Charlens.

Martin Thomas Sr. added that his son had really improved his game and that it meant a lot to him and his wife Marcy – who were honored on Sophomore Night as supportive parents.

Russian-born forward Ivan Kulkin, 25, played two years for the Kazakhstan team BK Barsy Atyrau before spending only the last 15 months in the U.S. In his first playoff run, Kulkin knows the Knights need to, “just be solid, work hard.”

Charlens compared this team to the 2008-09 team that featured now Utah Jazz player Malcolm Thomas. That team went 28-5 but lost in the first round of the state championship tournament.

“It takes way more than talent,” Charlens said when recalling the defeat. “We just happened to play our worst game of the year in the state championships.”

This year’s squad finished out the last five games with winning by an average of 18.2 points, dominating on the dribble drive and shooting beyond the arc, and most importantly, by sharing the ball.

Freshman guard/forward Chris Burton also peaked at the right time, winning the Feb. 16 PCAC Men’s Athletes of the Week honors with 20 points, seven rebounds and four blocks against Grossmont. Then came back strong with 24 points and six boards against rival Mesa in the conference clincher.

Freshman guard Singleton is leading the conference in three-point buckets and according to Charlens is one of the best shooters he’s ever coached.

“If we can lock up on D and just keep the motivation going, we’ll definitely be able to go pretty far in the playoffs,” emphasized Singleton.

Charlens admits that it would be nice to win a state title, but also states that he never looks past the next game. “What’s great is that we never have to count on one guy because we know that we have several guys that are going to step up.”

Jones added, “This team right here has something special.”