Knights roll into the second round of the playoffs 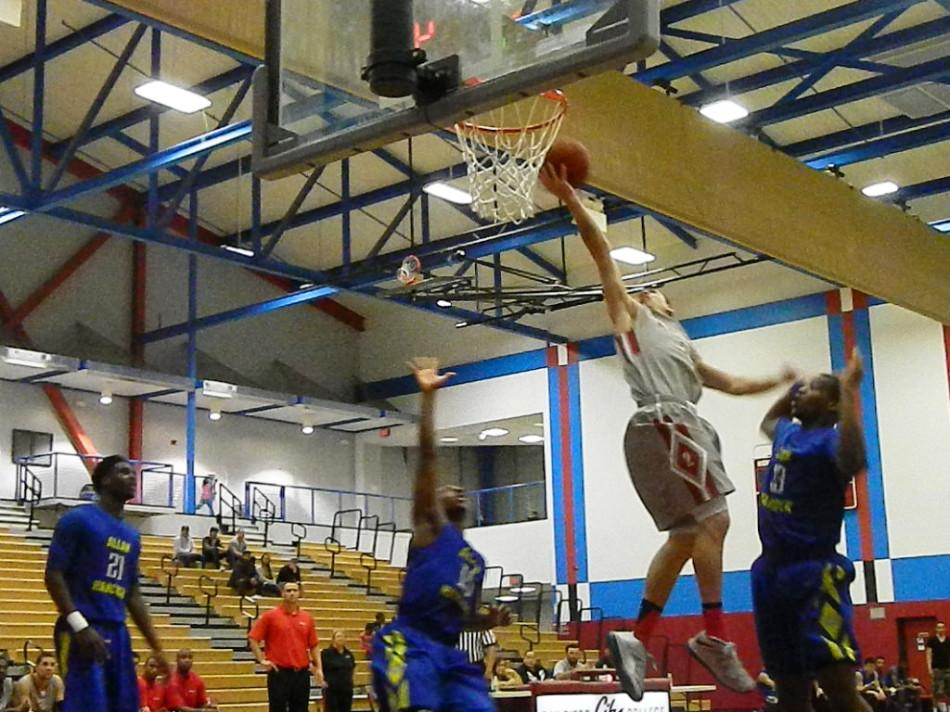 Freshman guard Christian Jones split the defenders for two of his 14 points as the Knights defeated Hancock to advance to round two of the playoffs. Photo credit: Christopher Handloser

The City College men’s basketball team looks light up the Inland Empire tonight, taking on fourth-ranked Chaffey College in their gym at 7 p.m.

The Knights (21-8) have plenty of momentum after easily defeating the Hancock Bulldogs in the first round of the Southern California Regional Championships at home Wednesday night.

In front of a packed house, the 13th ranked Knights lead the whole way – in a game that featured five players scoring in double figures – in route to a 107-95 victory.

“They played as a real team. There was no star,” stated Head Coach Mitch Charlens. “Each one was working with the other beautifully.”

Conference co-most valuable player Martin “Pooter” Thomas led the way with 22 points and seven assists, and freshman guard Mike Scott added 18 points and seven rebounds in route to the victory at home. Scott drove hard to the lane, getting to the line six times and went 10-11 from the stripe.

“I was feeding off my teammates,” stated Scott. “We were playing great defense and I got the ball in transition.”

“We came out to play tonight. Everybody contributed,” expressed Jones.

Up next, however, is a Chaffey squad (25-5) that had five players awarded All-Foothill conference honors. The Bulldogs also returned nine sophomores after an impressive trip to the state finals last season.

The Knights are familiar with their formidable opponent though, having handed them their second loss of the season by one point at the Neil Edwards Classic in Glendora last November.

The game was decided by a Thomas free throw in the final seconds. The Knights record was 2-5 at the time in exhibition play.

Then conference play began and they rattled off eight straight wins in route to their fourth playoff appearance in Charlens’ ten years at City.

In his first year at the helm in 2004-05, and with no returning players, Charlens guys battled to a 12-2 conference record and through to the second round of the playoffs.

Propelled by now Utah Jazz guard Malcolm Thomas in 2008-09, the Knights advanced to the state championships, but lost in the first round.

Their most recent appearance was in 2011-12 when they went 14-2 in conference, though again lost in the second round of the southern regionals.

But this game will definitely be decided on the court and on the clipboard. Chaffey Head Coach Jeff Klein won his 300th game on Feb. 22, averaging 23 wins a year in his 12 seasons with the program.

Game time is 7 p.m. in the Chaffey College Sicosky gym.

You can also find their campus map here.