When Football Reigned at City College 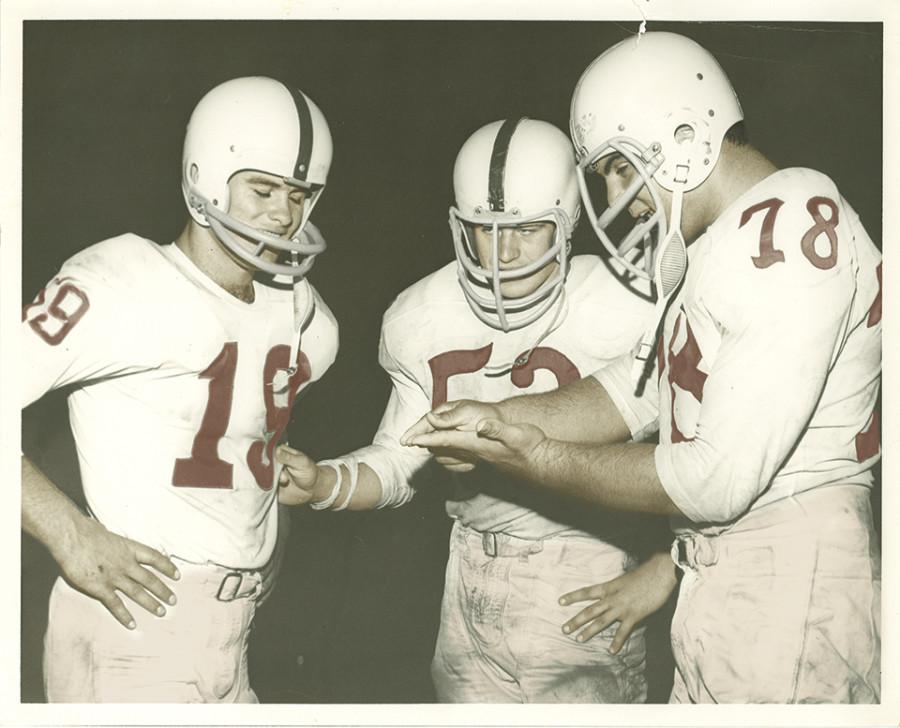 Thirty years ago at Balboa Stadium, the sounds of helmets clashing could be heard as the home crowd cheered on the City Knights football team under lights that shined down on the glory and pain of the players representing the Knights as the game clock ticked down on a Saturday evening in downtown San Diego.

Rewind another 40 years and halfback Harry West could be seen breaking tackles and rushing toward the end zone on the rugged grass at Balboa Stadium for the Knights in a time when San Diego looked a lot different than it does today.

Almost a hundred years ago, the football program began at what was then known as San Diego Junior College — just two years after the school opened — and the then-named “Jaybirds” went on to win championships for the school in the following years. After a name change from the “Jaybirds,” to the “Gray Castle Knights,” the football team had the campus filled with school spirit.

From players such as halfback Joe Brown, who carried the nickname “Joltin’ Joe,” led the team in the late 1940s by breaking tackles in a ground-and-pound running game along with teammates Cusimo Cutri and Harry West, and quarterback Jesse Thompson commanding the offense through the air.

With the help of Harry “the Horse” West, who went on to score a school record of 279 points during the 1948-49 season, the “Gray Castle Knights” went 8-1 in that year; the football team dominated the Pacific Southwest Conference by beating teams such as Oceanside 51-7 and easily winning the Metro Title Championship by beating East L.A. Junior College 39-0 to end their incredible season.

After his success at the junior college level, West, the famous halfback for City College, went on to play for the University of California, Berkeley Golden Bears. After playing for the Bears and delivering his high-powered runs on the field in the 1951 Rose Bowl in Pasadena, West ended up playing at the semi-pro level in Oakland before he found his way back to City College as the head coach in the mid-1960s.

During his coaching career, West led the newly named City Knights football team to conference championships in ’64, ’65, ’67 and ’73. The Knights were also were crowned the Elks Bowl Champions in 1964, beating Orange Coast College in a 28-24 battle on the gridiron.

According to the City Times archives, after his coaching days, West was the athletic director for City and was inducted into the California Community College Hall of Fame for his contributions as a coach and public servant in the community. The City College gymnasium is named after him in honor of his contributions to the school. Through reports found in the student newspaper, Coach West was a father figure to most student athletes and staff on the campus and led by example. West died in 2002.

Throughout the years playing at Balboa Stadium, the San Diego City football program helped produce 23 players who went on to play in the National Football League following their success on the junior college level, which propelled most of them to play Division 1 college ball before hearing their name called on draft day in New York City, according to databasefootball.com.

But now, the pads, helmets and cleats are long gone. The City Knights football program came to an end after all the victories and the cheering of the home crowd on Saturday nights. The Knights were defeated by the budgetary dragon that silenced Balboa Stadium in 1992.

Due to budget cuts that affected approximately 90 student athletes in each of four sports — football, volleyball, golf, and track and field — the athletic program at City had to give up their its teams. The budget crunch was divided among the three San Diego Community College District campuses — Miramar, Mesa and City. The City Knights football team merged with the Mesa College Olympians in 1993.

“The reason for moving football to one program only in the entire district was largely fiscal. It’s a big program, and hard to maintain and very expensive,” said Dean of Athletics Kathy McGinnis.

The City football team was able to experience its own glory days on the field, and the stadium itself also had its time in the spotlight.

According to the San Diego Historical Center website, Balboa Stadium made history when President Woodrow Wilson arrived and used an electric amplifying device to make his voice be heard amongst the outdoor crowd of 50,000 in 1919.

The stadium also held outdoor concerts for The Beatles in 1965, and Neil Young and Jimi Hendrix also rocked the concrete stadium, according to the San Diego Concert Archive.

Sporting events ranged from football games, soccer games, and track and field, and Balboa Stadium held many weekly events including auto races, according to StadiumsofProfootball.com. The stadium was also the home of the San Diego Chargers in the early 1960s, where the team played for six seasons and was crowned American Football League Champions in 1961, 1963 and 1965 before moving to what is now Qualcomm Stadium in 1967.

After renovations were made several years ago to the venue, Balboa Stadium is now used by San Diego High School and its football team and other sports teams. The San Diego Track Club, one of San Diego’s largest and oldest running clubs, also calls the stadium home. You might also hear the name “Boca Stadium,” which was used by San Diego’s professional outdoor soccer team, San Diego Boca FC.

Several City College students said they would like to see the return of a Knights football team.

“I think it would raise the school spirit because I have seen other schools that have football teams, and I think it improves the activity of students in my opinion,” another City student said.

“I think that it would be great,” student Zenen Poncial said. “I don’t know if they would make a new football stadium or where they could, but that would definitely bring a lot of new interactions especially with the students here; I think that would be a great thing.”

With the lack of space in the downtown area, there are no plans in the future to bring back the football program at City College.

“From my point of view, the reason that I don’t see football coming back to City — is the whole shared facility usage issue,” McGinnis said. “If you’ve ever tried to recruit a student athlete, and you’re competing against programs that have their own football stadiums on campus and you say ‘we play at a high school stadium,’ you’re not going to get the kids.”

Students who take classes at City College might be seen putting on Mesa College Olympians football helmets during the fall. With the ability to play on the football team at Mesa, students can take the opportunity to put on the pads and cleats after their classes at City.

McGinnis added: “I love football, and would have no problem managing a football program … But does it make sense? What makes sense to me is putting an aquatics facility where City students could benefit from learning how to swim, since we are right on the coast and we don’t have a pool. So what’s going to be best for the student population? I don’t think it’s football.”

The gridiron glory days are over, and most likely the football Knights will never make a comeback on campus. The Saturday nights at Balboa Stadium that showcased the pain and the glory on the field can only be relived through photos or, for the lucky ones who experienced it firsthand, in memory.