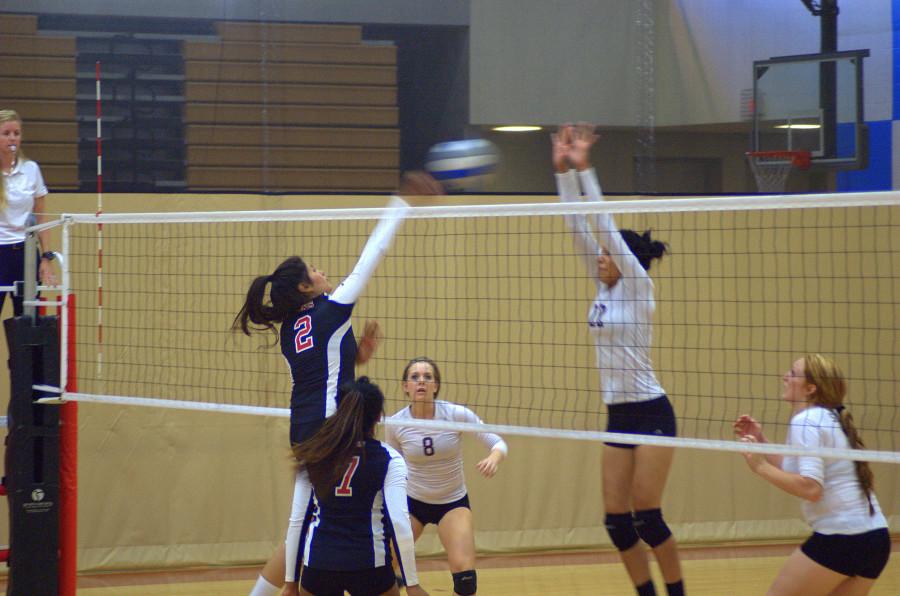 In the season opener for women's volleyball, middle blocker, Mia Torres (#22) jumps up to block a hard-hitting spike from a Santa Ana player on Sept. 3 in the Harry West Gymnasium. Photo credit: David Pradel

The Lady Knights started their volleyball season off with a bang by defeating Santa Ana College for the third straight year to open the season by winning the first 3 sets (25-10, 25-16, 25-14) at the Harry West Gymnasium on Sept. 3.

Within minutes of the opening set, the gymnasium echoed the sounds of high-pitched whistles from the referees, players diving for balls on the court and teammates’ cheering as volleyball season was back in full-form for the crowd watching.

Although the game got off to a rocky start for the Knights in their passing game, once they were able to settle down everything else followed and the Knights went on an 18-5 run with help from freshman setter Tristan Self who got the momentum going in the opening set by setting up her teammates for the ‘kill’ and also diving for balls on defense.

“I thought we did really good, we came out kind of slow but we picked it up. I thought we served really well and passed pretty well,” said Self.

Self finished the game with 11 kills, 33 assists and eight digs. With her great performance from early on in the game, Self thanked her teammates for helping her stay calm and focused.

“I feel like if I started to freak out and get all crazy I would hit out and make mistakes. I talk to myself a lot to try to keep myself calm as well because it’s just one point and not the whole game,” said Self.

During the second set, Santa Ana began with an early 9-7 lead but the Lady Knights were able to separate themselves with a 14-3 run. Sophomore outside hitter Lisette Kelly also made her impact for the Knights by sending shock waves through the crowd with every hard-hitting ‘kill.’ Kelly finished the game with eight kills.

After winning two straight sets against Santa Ana, San Diego City College never lost their momentum and began the third set with a 5-1 lead. After a couple of timeouts from the Don’s to try to make a comeback, the Knights continued their dominant play on the court and cruised to a 25-14 win for the sweep.

The scoreboard indicated a blowout, but there is always room for improvement.

“I think we can get better at blocking and our pins and we missed quite a bit of serves. So working on our middle serving is where we can improve,” said Kelly.

“I think we got to do a better job creating our own energy in this gym. It’s a big gym and we got to do that from the bench and the players as we got in some low’s during the match,” said Head Coach Kevin Pratte. “But it was a great start to the season and I am very optimistic about his group but we have a lot of work ahead of us in the season.”

The Knights next home will be on Friday, Sept. 26, as they take on Mt. San Jacinto College at 5 p.m.