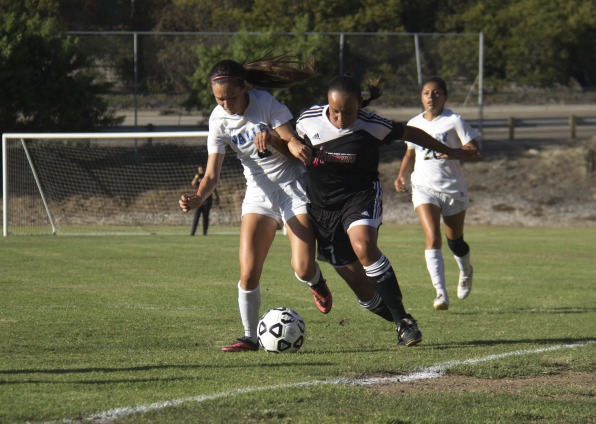 The San Diego City College women’s soccer team suffered another loss during a home game against San Bernardino Valley College, losing in a 4-2 battle on Sept. 19.

Last week, the Lady Knights won their first game against West Hills College. However, they weren’t so lucky this time around.

The Wolverines were able to push through early in the opening minutes of the match as midfielder Katie Hernandez crossed the ball into the Knights territory and after taking a deflection off the Knight’s goalkeeper, forward Amairany Rosales was there for the rebound to tap the ball in.

That didn’t stop the Knights from scoring moments after. As the Lady Knights drove down the field eager to tie the score. Freshman defender, Jennifer Inacio received a corner pass from freshman forward Sandra Buckner and was able to find the back of the net to tie the score, 1-1.

San Bernardino had a greater advantage than City. The team had twice as many girls as the Knights allowing more girls to rotate and recharge many of their players. During the second half, the Knights performance was slowing down as the opposing team was charged to play and was faster.

Coach Andi Milburn explained some advantages the opposing team had, “They were playing more aggressive and faster.”

San Bernardino had more opportunities to score during the game and had better ball control. With ten minutes left in the first half, forward Mariana Madrigal stormed down the field for the Wolverines and passed it to forward Gabriela Parra who went in for the shot but the Knights goalkeeper jumped in and made a diving save.

Eager to score again, the Wolverines set up a clean shot that drew passed two of Knights defenders and allowed forward Cynthia Chavez to take the shot and score.

The Lady Knights took another victory shot, but were not able to keep up as the Wolverines scored another goal by Chavez.

San Bernardino took the a 3-2 lead at the end of the first half.

The Knights’ defenders did a great job of keeping the ball out of the goal box during second half. They collaborated efficiently. However, the team had difficulty moving the ball up on their side of the field during the second half.

San Bernardino’s defenders used strong force to keep the Knights outside while the midfielders and forwards drove down the field.

The Knights lost 4-2 but weren’t discouraged for their next match.

Knights midfield Kimberly Solis expressed her thoughts of the game and her teammates, “We improved more from last game…and were motivated during the game.”

Solis continued on what she feels the team can work on, “We need to work on physical and running more, and communication…(It was) better than before, but we still need to improve.”

Next week, league begins for women’s soccer. The girls will likely have time to work on their weaknesses and focus on strengths. Inacio commented on the team’s performance. “We slowed down during second half. Overall we did good…We need to work on touch.”

The next home game for the women’s soccer team will be on Sept. 27, against College of the Sequoias at 10:00 a.m.