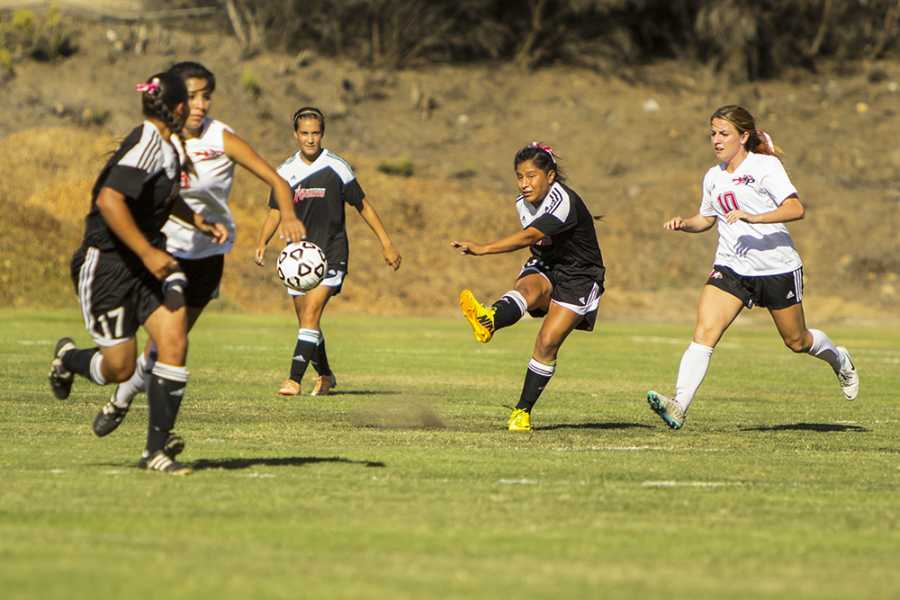 After a grueling battle over the ball City College freshman defender Stephanie Merida (center) kicks the ball to her offensive teammates during a home game against Palomar College on Oct. 3. Photo credit: Celia Jimenez

The Lady Knights have had a shaky season with only two wins at home.

Within the first 10 minutes of the first half, the Comets were able to score. Forward Rachel Stahl assisted Analisa Manzo with a cross for a head shot that was able to squeeze past the goalie and into the back of the net.

Despite the heat in the late afternoon and being down 1-0, the Lady Knights played aggressively throughout the first half and were eager to tie the game.

Sophomore forward Rebecca Garcia was fully charged having everlasting energy to play. Her quick moves lead the Lady Knights into the opponent’s territory multiple times. However, the Comets’ defenders secured the goal and drove them out each time. Defenders Justine Miranda and Elexus Garcia marked her throughout the game.

The Comets’ defenders kept a sharp eye on Garcia, watching her every move and shadowing her. Even though the defenders were on her tough, she was aware of their moves as well. She said, “I have a good sense of where my defenders are or when my opponents are on me.”

Freshman defender Felicia Valenzuela was swift and played assertively, not allowing the Comets to get passed her.

The first half ended with Comets in the lead 1-0.

The Comets came fully charged in the second half, ready to score again. However, the Lady Knights defense stopped them from having a second chance.

Manzo was looking to score again for Palomar with her swift moves and driving down the field into the Knights defense. But the City College defenders did an excellent job of not letting her score again.

Although the Lady Knights were scored on once in the first half, goalkeeper Charlotte Guerrero had many saves and kept the ball out of the box. Guerrero battled with defenders to keep the Comets out of Knights territory during the second half.

Guerrero commented on what improvements the team needs to work on. “I feel we’re lacking a little bit with speed, but overall we put up a fight, “Our aggressiveness was definitely there but we definitely need to work on keeping it there for the full 90 minutes.” She continued to say, “We progressed really well but today was just an off day.”

The Lady Knights were able to tie the game during the second half but after many attacks the final whistle blew and the Comets’ early goal in the first half was enough to win the game.

Garcia thought differently regarding the team’s performance, “We’ve had better games. I think we lacked intensity and aggressiveness. We could of done a lot better connecting the ball with our teammates.”

The next home game for women’s soccer will be on Oct. 10 against Imperial Valley College at 1 p.m.