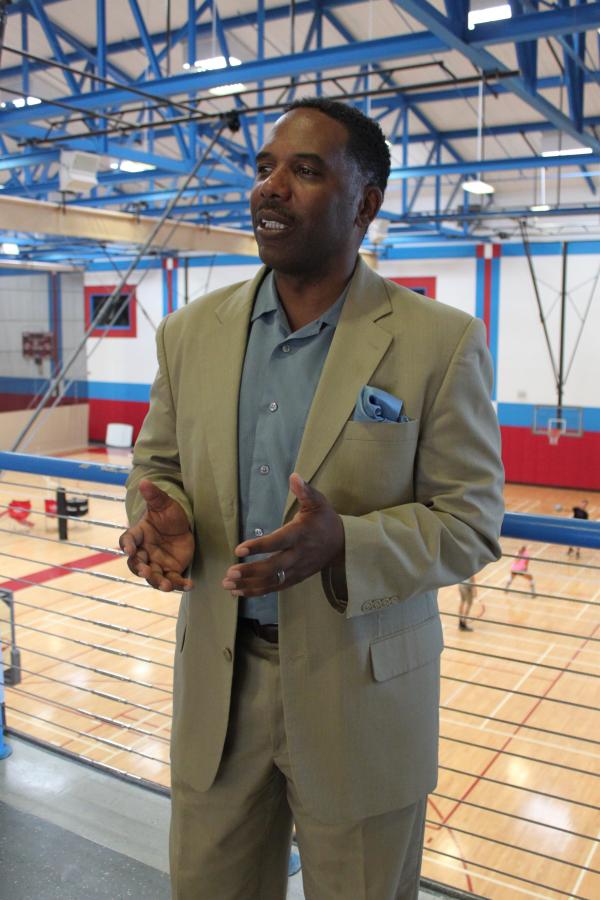 Acting Athletic Director Larry Maxey stresses the importance of athletes establishing themselves as individuals, off the field and court. Photo credit: Miguel Cid

Maxey is familiar with the life of the student athlete. Maxey is also the associate dean of outreach, and his presence on campus at Knights sporting events has been felt since early on in this semester. He can often be spotted at games in a burgundy sports polo and sunhat; and off the field, on campus laced up and suited in a sport coat. At both locations he is there for the students and athletes attending City College.

When he is not on the field, Maxey can be found in his office, P3-202, in the Harry West Gymnasium, where he encourages and welcomes students and athletes to knock on his door. He said he believes they can benefit from what he has to say in order to reach the next level.

“In order to be the best, you have to work at it, you can’t take shortcuts,” he said. “You have to workout and strive and be a balanced person. Success is not measured by what you do on the court on the field. It also is measured by the kind of person you are in society.”

During the first home game for the men’s soccer team on Sept. 3, Maxey gave his thoughts on the sideline about what he wants to see from the team and all the athletes at City College in the upcoming seasons.

“My expectation is that we will have a bunch of young men and women who will work really hard, that they be part of a positive culture and positive learning experience,” he said.

Along with his brother and sister, Maxey was born and raised in San Diego by a single mother. He sought sports out at the age of 10, taking in the positive influences and comradery that sports and group activities bring.

“For people who are athletes, it’s difficult to describe the feeling you get from being part of a family, where you all have a common goal and are trying to win together. It’s a wonderful thing,” he said.

Taking care of business in class and excelling at football, Maxey earned sports scholarships around the nation, but stayed close to home where he went on to play for San Diego State University in the early ’90s as a defensive back and running back during the same time Marshall Faulk was rushing for the Aztecs.

Maxey was given the opportunity to pursue a career in the National Football League but declined in order to continue down the path of education, majoring in criminal justice. He continued on to Bellevue University where he wrote his master’s thesis on athlete identity and how to break free from it.

He elaborated on his perspective about athletes leaving the game: “I think that it’s very important for athletes as they transition away from sports to begin to reshape themselves and begin to break away from the athlete identity. If you don’t change the way you perceive the world, you’ll be left behind.”

According to Maxey, the biggest obstacle student athletes face is loosing the balance between being a student and being an athlete.

Maxey added, “A lot of athletes have the impression, or they engage the world as if they can only do one at any given time. We have to teach these athletes to be balanced and to be doing their best in all of these areas, at every opportunity that they have. So when they stop playing they can see a future for themselves. There’s nothing like a person who has excelled in something and now that opportunity is gone.”

Even though Maxey doesn’t live in the past, a vivid memory crossed his path: attending a Knights soccer game at Southwestern College. He relived the recollection and shared it, something he doesn’t do often.

It was a high school playoff game in 1988 against Granite Hills, in which Maxey scored four touchdowns and returned a punt for a touchdown but it would be overturned due to penalty; four touchdowns were scored in the first half of the football game. At the time the only player to score five touchdowns in a high school playoff game was Marcus Allen. Both the coach and the young Maxey were unaware of the record at the time and Maxey sat for the remainder of the game for Morris High School.

He said, “I generally don’t think of those kinds of things because I’m so far removed from athletics — but now that I’m here and I’m going to these various places and walking across the field it just brings it back to mind.”

Maxey stepped off the field a long time ago, earning a degree in criminal justice from San Diego State University and a master’s from Bellevue University — leaving his sports identity in the past — but Maxey seems to be one of those guys who just might accept a challenge to a footrace on a good day when nobody’s looking, suited up in a sports coat or in sports attire.