The Knightly battles at the net 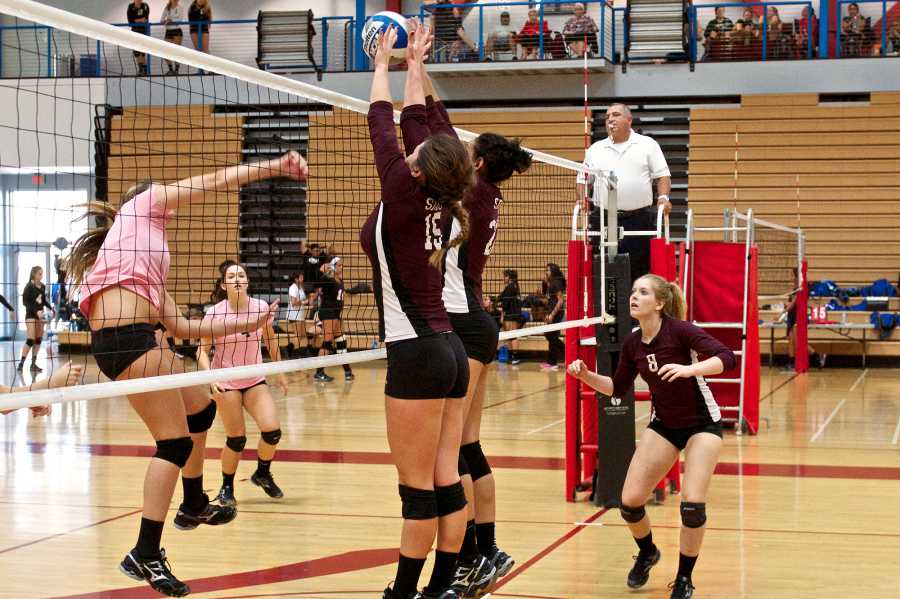 Sophomores Lisette Kelly (#15) and Mia Torres (#22) block the ball from an opponent from College of the Desert during the San Diego City College tournament on Sept. 27 where they finished second overall out of 13 teams. Photo credit: Troy Orem

The San Diego City College women’s volleyball team is off to its best start since 2009 with an overall record of 7-5, and is ranked 23 in the latest California Community College Women’s Volleyball Coaches Association rankings.

The Lady Knights have won four their last six matches and are in a battle with Mesa College and Grossmont College for first place in the Pacific Coast Athletic Conference.

After winning their season opener against Santa Ana College and beating Rio Hondo College in their second game, the Lady Knights lost their next two games against Golden West College and Irvine Valley College but the Knights were able to recover and win their first conference game against Imperial Valley College (3-1) and were also able to squeeze out a victory against Mt. San Jacinto College (3-2) after losing the first two sets in the match.

Following their win against MSJC, the team went on to compete in the 8th annual SDCC Volleyball Tournament on Sept. 27 at the Harry West Gymnasium and finished second overall out of 13 teams. Although the team began the tournament on a rough start by losing to Scottsdale College (1-3) in the group stage, the Lady Knights were able to bounce back by sweeping the College of the Desert (3-0) and continued their momentum in the single elimination round by defeating Reedley College 25-18.

The Lady Knights moved on in the tournament and faced Scottsdale College in the semifinals. In the rematch, City College fell behind in the opening minutes 7-2 but were able to come from behind with strong performances by sophomore Lisette Kelly and freshman Tristan Self who led the Knights to a 25-22 victory.

In the championship match, City College couldn’t continue its momentum after its come-from-behind win and lost to Pima College 25-16.

Although the women’s volleyball team finished second – the team is getting stronger as the season moves along.

“I think we’re having an excellent progression and I think we are practicing really hard – the girls are really focused and realizing that every match in this league is going to be really tough. It’s a pleasure to see that they’re getting better at practice and it’s transferring on the court,” said Head Coach Kevin Pratte.

Following the SDCC Tournament, the Lady Knights went on to sweep Cuyamaca College (3-0) on Oct. 1, and on Oct. 3, after falling behind against Southwestern College (2-1), the team rallied back in the match and won (3-2) and remained undefeated in the conference with a record of 4-0.

But their hot start in the conference came to a quick end against Grossmont College on Oct. 8 after losing (3-0).

“I think we definitely started off strong – our team has really good chemistry on the court; we played hard and we limited our errors so I think we could’ve won but it was just a few points that changed our momentum,” said sophomore Michaela Keller. “I definitely think we can keep a winning record and still come first in league and that’s our team goal and I think we can definitely achieve that.”

The Lady Knights will face Grossmont College again and are looking to win when they meet on Nov. 7 at the Harry West Gymnasium.

The women’s volleyball team is off to a strong start in the season and has developed great team chemistry thus far.

“I’m really enjoying just the team itself and how we are all gaining close relationships with each other on the court and off,” said freshman Rio Jimenez. “I’m having a really fun time getting to know the girls and the coaches.”