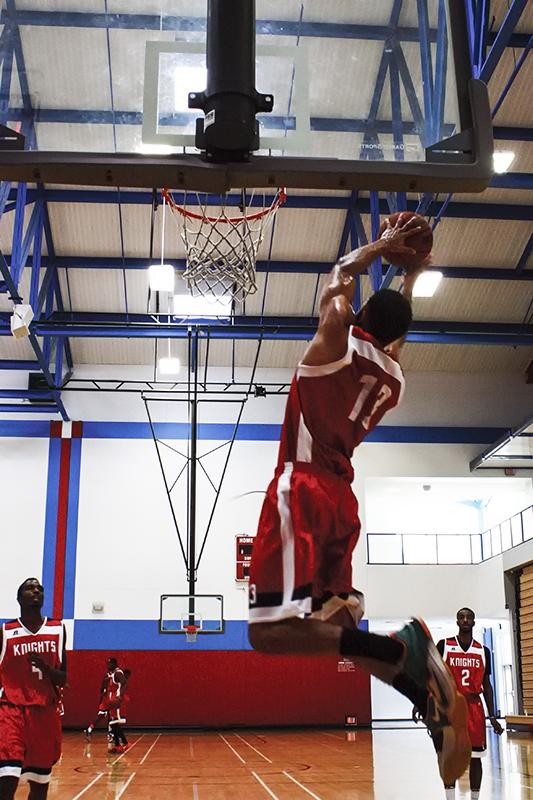 The loud echoes from the basketballs hitting the hardwood court can be heard the moment you walk into the Harry West Gymnasium as the City College men’s basketball team could be seen training hard and eager to begin the season.

Last season, the Knights were undefeated in conference, 8-0. The team advanced to the playoffs and succeeded to the second round. However, they lost in a devastating battle against Chaffey College by a few points. Sophomore Stacey Lambert said, “We won the (Pacific Coast Athletic Conference) championship last year. We went undefeated (in conference) then lost in the second round in playoffs.”

If not all, a majority of men’s basketball have one specific goal they want to achieve throughout the whole season: that is to once again be undefeated and win the championship. Sophomore guard Christian Jones said, “If we want to win the championship, we gotta get better at everything, at every aspect.”

The team has been practicing relentlessly and is ready to start the season. Although they may feel ready to dominate on the court, there are some aesthetics that can be worked on.

“Our defense needs to be a little more tighter. We’re doing a good job in our execution but it can always be better,” said Assistant Coach Roy Morris. “We had a good year last year and that’s in the past and now we’re trying to get better and want to go do some more damage later in the season.”

The Knights have many returning players and newcomers. Sophomore guard Chris “Boom” Burton commented on the players this season, “We have a great core coming back from last year and we got a lot of new young players that seem like they’re gonna bring a lot to the table this year.”

Newcomer Spencer Mattox is a freshman who graduated last spring from Sweetwater High School. Mattox was one of the leading scorers in the county in high school. He said he is excited about, “Being able to play with these guys and be able to be coached by these coaches since they are the defending champs.”

Jones shares his experience being with the team and working with the coaches. He explains the coaches go above and beyond for the team and are dedicated to helping the Knights perform better and advancing their skills. “They are different from any other coaches I’ve ever had previous years. They really care about us as people and as players … They give everything they have and put it into us.”

Head Coach Mitch Charlens is excited for the team and explains, “They really know how to play together, that’s huge – that’s more important than skill. I can’t wait to watch them (compete) against someone else.”

The men’s basketball team will be begin its season in the San Francisco Tournament from Nov. 6-8 and following the tournament, the team will be hosting the Knights Invitational from Nov. 14-16 in the Harry West Gymnasium.