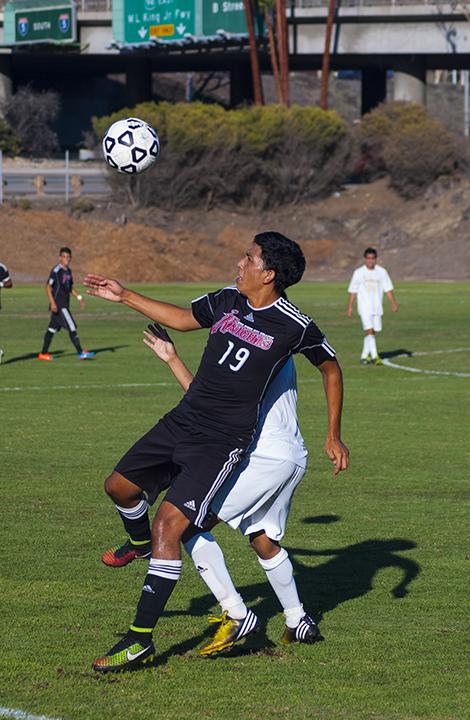 Sophomore forward Daniel Morales fights for possession of the ball against a Southwestern College defender on Oct. 24 where both teams tied 1-1. Photo credit: David Pradel

Even as the season winds down, the games and races for the Knights continue to intensify and the pressure is on as they fight to keep their season alive and battle on the courts and on the field.

The women’s soccer team came away with a 3-0 victory against Imperial Valley College on Oct. 21. Sophomores Rebecca Garcia and Lannet Sanchez and freshman Sandra Buckner were able to find the back of the net for the Knights and improved the teams’ overall record to 5-8-2 and evened up their conference record at 2-2.

The men’s soccer team battled against Southwestern College on Oct. 24 in a game that ended in a 1-1 tie and putting the Knights overall record to 4-5-5 and their conference record to 4-1-2. Southwestern took the lead in the opening minutes of the second half but freshman midfielder Tabu Okello answered back for the Knights. Sophomore forward Daniel Morales was named Pacific Coast Athletic Conference Athlete of the Week on Oct. 21

The women’s volleyball team continue their dominant season as they swept Imperial Valley College, 3-0 (25-10, 25-17, 25-22) on Oct. 24. Freshman setter Tristan Self recorded 35 assists and sophomore outside hitter Karlee Troeh had 16 kills in the Knights win and improved the teams overall record to 9-6 and their conference record to 6-3. Troeh was also named PCAC Athlete of the Week on Oct. 21