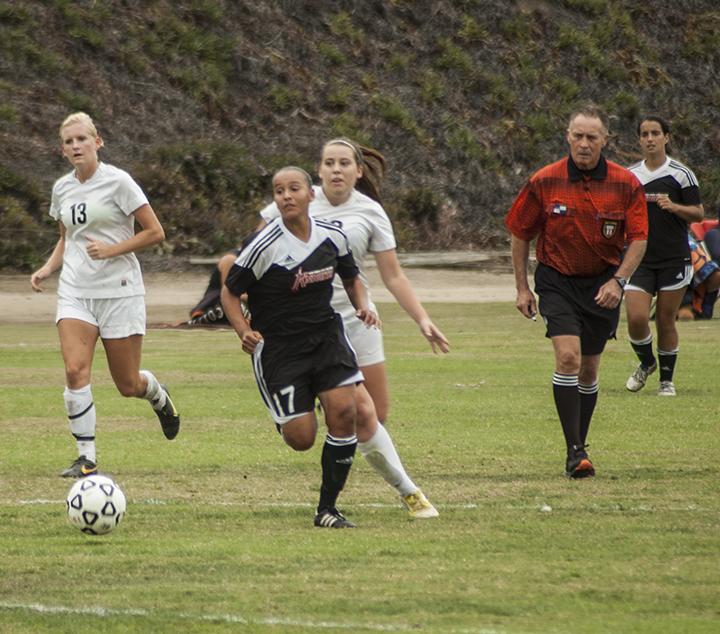 During a Knights attack, sophomore forward/midfielder Rebecca Garcia gets past the Jets defense on Oct. 31 at the SDCC Soccer Field where City College lost 3-0 against Miramar College. Photo credit: David Pradel

In a calm first half both teams fought for the ball in the middle of the field, intercepting each other’s passes. There was minimal action for both goalkeepers, with the exception of two saves by Knights goalkeeper Charlotte Guerrero, in the last minute before the first half ended. The teams were tied going into half time.

Six minutes into the second half Miramar College produced its first goal from a header by sophomore defender Sydni Scholari.

At this point the Knights Head Coach, Andi Milburn asked her team to anticipate the passes and to play with more intensity during the second half but with no good results as Miramar managed to score its second goal almost in an identically play as the first one, a header from a corner shot, this time by sophomore defender Sierra Hall.

Nine minutes before the final whistle, sophomore forward Karolina Salazar scored the final goal for Miramar College and the game ended with a final score of 3-0.

”We didn’t play well in the first half, we made some adjustments and kind of got into our girls a little bit and they responded and we played better soccer in the second half,” said, Sean Bowers, head coach of the Miramar College women’s soccer team. ”I compliment San Diego City College, they played really hard, and they made it very hard for us.”

The Knights have improved during the season and right now the team holds an overall record of 6-9-2.

“They made huge improvement, tactically the girls are a lot more aware of where we want them to be, we really step on our intensity in the last couple of games,” Milburn said.

With playoffs being four games ahead, the Knights will try to overcome this loss against the Jets and focus on the upcoming games as the season ends.

“We only have four games left, right now we’re sitting in second place, if we can beat Mesa next week and then beat Cuyamaca and Southwestern the second time, we’ll be solid in second place.” Milburn added.