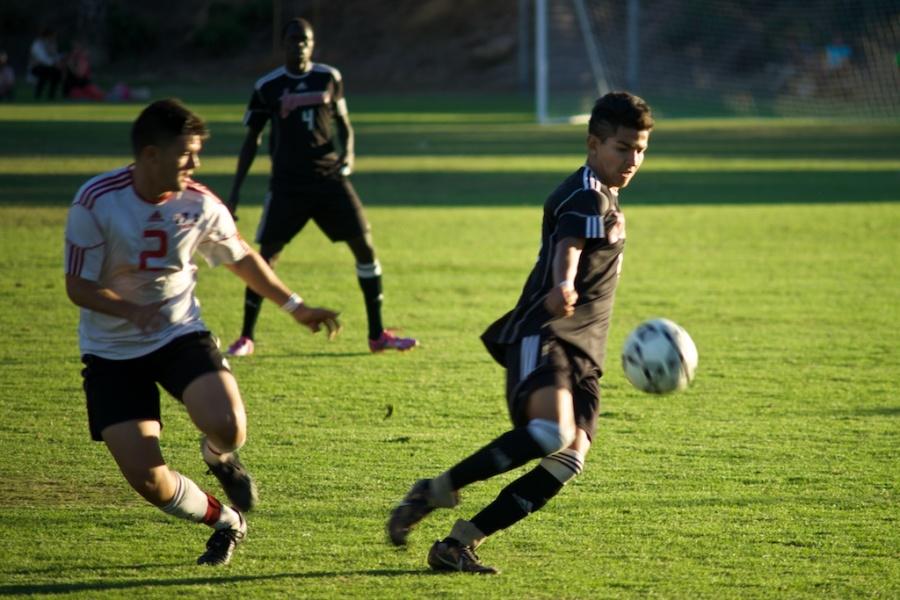 Knights defender Angel Garcia takes the ball from an opponent from Imperial Valley in the Nov. 7 home game. The Knights went on to win the game 2-0. Photo credit: Troy Orem

It was a crazy night of soccer on Nov. 14, where the San Diego City College men’s soccer team tied with Southwestern College for first place in the Pacific Coast Athletic Conference.

“To share a championship is not a bad thing — we wish we were there by ourselves but it’s not a bad thing; it’s success,” said Head Coach Milton Hidalgo. “I told the boys because they were all feeling bad don’t apologize for success, we had a good year and that’s how you guys have to remember it; we are co-champs, because there are six other teams that wish they had that.”

City College traveled up north to battle against Chaffey College but since it wasn’t a league game it didn’t affect their standings in the conference. The Knights ended up losing 5-1, but even with the loss, the Knights still won.

Coach Hidalgo expressed that he is very proud of the team and how proud he is by all the players that represented City College this season by making progress on and off the field.

“We’ve come a long way; we’ve improved 100 percent from when we started — we’re a much better team, we’re more organized, more disciplined and have played smarter and have improved in every face of the game,” Hidalgo said.

With the Knights and the Jaguars tied for first in the PCAC, Southwestern won the tiebreaker to advance to the state playoffs because they beat City College earlier in the season. There’s still a chance City College would make the playoffs, but it remains unclear until Nov. 18 when they attend the end-of-season conference and postseason meeting.

The Knights have fought through tough battles and were unbeaten in their last 11 games, 7-0-4. However, they did not begin the season so lucky and bounced back midway through the season.

Sophomore defender Ethan Sauls said, “We started off slow but we slowly got better. We were on an 11 game unbeaten streak. We’ve made a lot of improvements and have played better as a team.”

The Knights entered this season shaky with an overall record of 0-5-3. However, they were able to bounce back on Oct. 3 after beating Mesa College, 2-0 and collaboratively have work together to finish some games with sophomores Daniel Morales and Reddiet Mekonnen leading the Knights.

Forward Reddiet Mekonnen explained what the Knights need to improve on to win if they advance to the playoffs: “If we score more then we will be good. We have good defensive players, good midfielders, but what we need to work on is just finishing.”