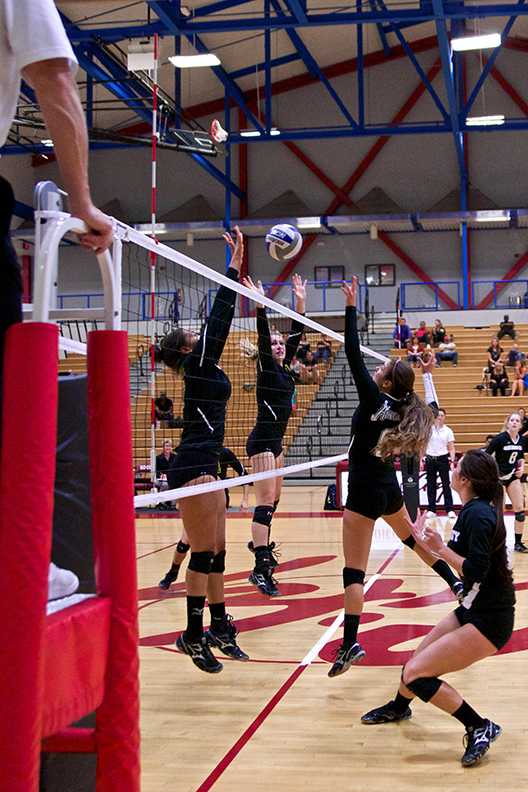 Outside hitter Michaela Keller returns the ball during the Nov. 7 home game against Grossmont. The Knights went on to lose the match 0-3 Photo credit: Troy Orem

After starting the season off strong, the San Diego City College women’s volleyball team is now struggling after losing six of its last 10 games.

“Unfortunately, we have lost a few matches in row and our overall record is not where we want it to be. We have suffered some injuries this year,” said Head Coach Kevin Pratte. “We have had a lot of different line-ups due to the injuries. Anytime your top players go down, it is difficult to produce wins in the Pacific Coast Conference.”

With the injuries that happened, the team was forced to move their top players into other playmaking positions. Sophomores Karlee Troeh, Lisette Kelly and Michaela Keller have been handling the sudden change well and Coach Pratte expressed that he is impressed with the leadership from Troeh who has kept the moral up for the team during the team’s season slump.

Coach Pratte also believes that the PCAC is the second toughest volleyball conference in the state but is glad that the team is in a competitive conference.

“Sometimes you just have to tip your hat to the teams that beat you. We have lost to some high level teams this year in conference play,” Pratte said.

Aside from winning tough games during the season, the players have also succeeded off the court.

“We have many players with high grade point averages, players that are seeking internships to advance their careers, sophomores that are looking to earn volleyball scholarships to four year universities and this team has actively been involved in the community,” said Pratte.

The Knights have two more games left in the season and will be facing Mesa College once again at their home court on Nov. 19 and will end the season at home on Nov. 21 against Palomar College at 5 p.m. where the team will be looking to end the season on a positive note.