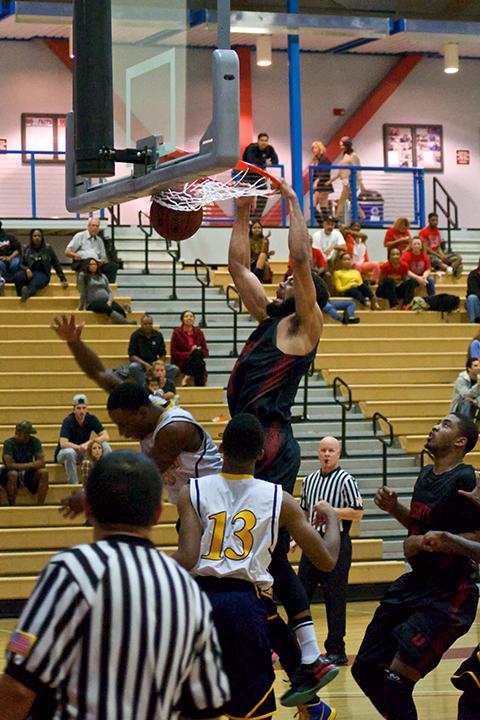 Sophomore guard Chris Burton dunks on a Barstow College player on Nov. 14 in the Harry West Gym. where Burton recorded a total of 39 points in the Knights 119-71 victory. Photo credit: Troy Orem

After many failed attempts at reaching first place in previous years, the men’s basketball team were crowned champions of the 2014 Knights Invitational Tournament after defeating Barstow, Mt. San Jacinto and Southwestern colleges on Nov. 14-16.

The first round of the tournament proved easy for the Knights on Nov. 14 against Barstow College. The men collectively scored 76 points in the first half. They played in harmony passing the ball when needed and locked down on defense efficiently.

The Knights dominated in the first half leading 76-37.

In the win, the team broke three tournament records during the game. Sophomore guard Chris Burton broke the first record by scoring 30 points in the first half. Burton finished the game with 39 points, 10 rebounds and went 10 for 10 from the free throw line.

The team broke a first half record by scoring over 70 points and last they scored 119 total points in a game.

After their record breaking game, the Knights advanced to the second round of the tournament and competed against Mt. San Jacinto College on Nov. 15.

Within the first three minutes of the first half, the Knights were up 11-0. The Eagles were able to catch up as the game progressed, but the Knights showed no signs of weakness as they continued to push through with a 88-76 victory against Mt. San Jacinto College.

Jones and Burton led the Knights to victory. Jones scored 15 points, recorded 11 assists and went nine for 14 from the free throw line. Burton scored a team-high 23 points, and grabbed eight rebounds in the game. Sophomore forward Stacey Lambert was able to grab a team-high of 12 rebounds during the game.

On the last night of the tournament, the Knights battled Southwestern College in the championship game on Nov. 16.

All of the hard work and extra time put into practice came down to this game as they vigorously played to earn the championship title.

The first half of the game was slow with little points scored by both teams. Both teams played sloppy with countless mistakes made. The Knights had 10 turnovers and the Jaguars had 13 turnovers.

However, the game fired up as the Knights scored multiple points against Southwestern.The Jaguars were unable to catch up, although they were close in the last minutes of the first half.

Jones suffered from a dislocated finger during the first half. But he sprung back into action in the second half playing rapidly and appeared like there was no injury. He said he disregarded the pain and that adrenaline kept him going.

The excitement boiled in the second half with sophomore guard Caleb Singleton putting up multiple three pointers and scoring 16 points.

The fight to victory wasn’t easy for the Knights, but they persevered and didn’t give up. They led in points during the second half and made sure Southwestern didn’t catch up. They played persistently, quickly passing the ball and were kept on their toes playing defense.

Singleton led the Knights in the championship game and finished the game with a team-high of 25 points, grabbed seven rebounds and went five for 10 from the three point line.

The Knights won the last game beating Southwestern 84-68 and were crowned the 2014 Knights Invitational Champions.

Burton was awarded MVP of the tournament for the many points he scored and vigorous style of play. He recorded a total of 76 points in the tournament, grabbed 21 rebounds and had a field goal percentage of 74 percent. Burton only missed two free throws in the entire tournament by going 17 for 19.

When asked how he felt about receiving the MVP title, he had little to say about himself and more about his teammates performance, “We put a lot of work during practice and a lot of the extra work when no one’s around putting up shots, working on our game just like that. It feel good for it to pay off.”

He later said, “We went 3-0 in this tournament and now it’s on to the next one.”

Jones explained why he feels the Knights were able to win the tournament,”I feel like any game we play we’re gonna have control of the game because we got a great back court and we also got great bigs. Everybody is starting to understand their role a little more. That’s big in running the team if everybody knows their role.”

Head Coach Mitch Charlens expressed after the championship game that he intentionally makes the tournament challenging every year and invites colleges with strong teams and was pleased that the Knights were the champions.

Jones expressed his feelings winning the tournament and that this is the first time the Knights were first place: “I feel great that we were able to come out here and give Coach (Charlens) his first City Knights tournament championship.”

The Knights next home game will be against L.A. Harbor College on Dec. 30 at 3 p.m.