A roller-coaster ride on the court 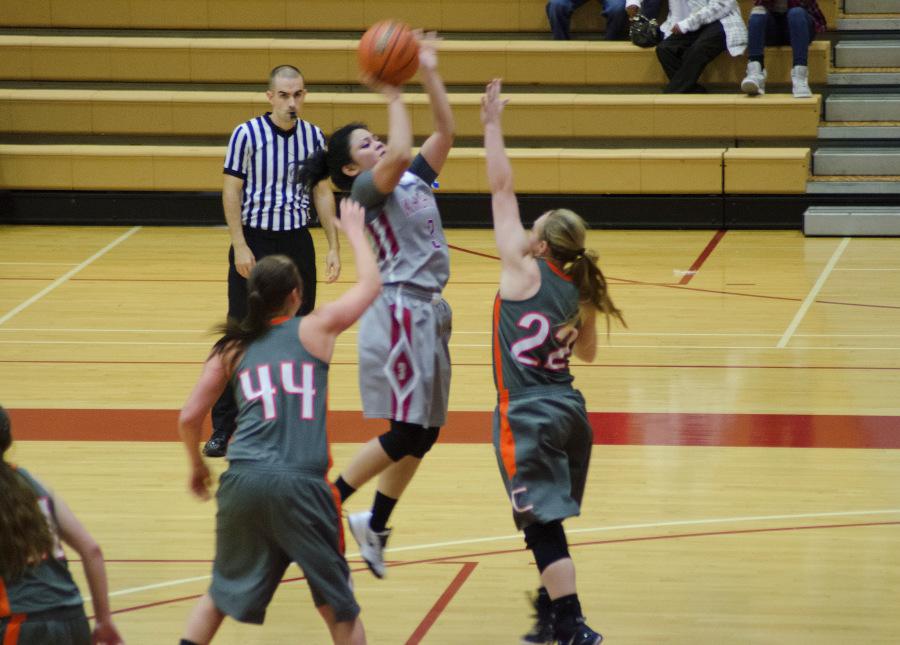 Sophomore point guard Darrian Castillo shoots over Central Wyoming's guard Heather Townsend on Dec. 13 in the Harry West Gym, where the Knights lost 67-44 in the second round of the Knights' Colbert Classic. Photo credit: Richard Lomibao

After winning the championship two years in a row, the San Diego City College women’s basketball team were looking to make it three years in a row but as the battles on the court took place in the Harry West Gymnasium, the Knights finished third overall in the second annual Knights’ Colbert Classic.

“Overall, I think we did really well – aside from the lost (against Central Wyoming College), the team played hard and we still have some things to work on but we are getting there; we are moving up,” said sophomore point guard Darrian Castillo.

In the first round of the tournament and also in the team’s first home game of the season, the Knights faced Victor Valley Community College on Dec. 12. The Knights got off to a strong start in the opening minutes of the game with a 10-3 lead against the Rams and forced Victor Valley to call a couple of timeouts in the first half.

After the timeouts from Victory Valley and after a few changes to their game plan, the Rams slowly started to get back into the game and kept the Knights from finding their rhythm and before they were able to put a gap on the scoreboard.

In the second half, the Knights were able to find their rhythm on the court and went on a 10-0 run and it seemed that the Rams had no answer to their strong second half performance. The Knights were led by sophomore point guard Darrian Castillo and sophomore forward Nyaduop Lam.

Castillo led the offense by setting up her teammates for open shots and got the ball down low for Lam and others for the easy lay-up. Castillo finished the game with team high of 18 points, recorded eight assists and grabbed 12 rebounds.

Lam recorded 12 points, 13 rebounds and had three blocks in the game.

As the points kept coming in for the Knights, the team finished strong and the Rams were unable to overcome their 20-point deficit against City College.

The Knights pulled away with a 68-48 victory and moved on to the second round of the tournament.

“I think this was our best game offensively that we had all season – we had great communication both on offense and defense and that is what was really good about this game,” Castillo said.

Both Castillo and Lam said at the end of the game, that sophomore forward Shamonique Malone-Boyd had a huge impact on their win by “getting those boards’” on both sides of the court.

In 19 minutes of action, Malone-Boyd came off the bench and scored 16 points and grabbed 16 rebounds. Malone-Boyd made her minutes count and had a huge impact for the team during their strong second half performance by creating many second chance points for the Knights.

On Dec. 13, it was a whole new story for City College as they faced Central Wyoming College and right from the start of the game – the Knights were unable to continue their strong performance against the Rustlers.

In the opening minutes, Central Wyoming went on a 7-0 run and forced Head Coach Andrea Aguilar to call a few timeouts and make changes to the line-up in order to get the Knights rolling.

The Knights were able to put some points on the scoreboard but still continued to make mistakes on the court and gave too many opportunities for the Rustlers to score.

The first half ended with the Knights down, 31-24.

It was a game of catch-up once the second half began for the Knights, which forced the team to take quick shots and it seemed as if the offense could never settle in as the Knights were playing against the clock rather than their on-court opponents. The team was forced to take many outside shots because of Central Wyoming’s 6-foot 6 center, Stephanie Smith, who clogged up the paint down low and forced difficult lay-ups for the Knights.

“Coming into the game, we weren’t intimidated by (Smith) or at least I know I wasn’t – she was just hard to get around in the paint and forced us to take tough shots,” said Lam. “I never had my shot blocked and it was a challenge and a learning experience for us.”

Smith finished the game with 6 blocks and 10 rebounds.

With Smith down low, the Knights had to score from outside but never got into their shooting rhythm as the team went 14 for 62 from the field.

Central Wyoming started to run away from the Knights on the scoreboard as the points kept coming in – the Rustlers had a comfortable 23-point lead in the final minutes of the game and defeated the Knights 67-44.

At the end of the game, Lam was lost for words on their lost. “I don’t know what happened… it wasn’t a pretty one.”

Lam finished the game with a team high of 19 points, grabbed eight rebounds and had five blocks.

Lam continued to say what the team needs to do in order to come out with a win for third place.

“In our next game, we got to work hard and work together and play with some heart because we started dying-out at the end; we stopped working together and we need to regroup.”

In the battle for third place of the tournament on Dec. 14, the Knights faced MiraCosta College and from the opening tip-off of the game – the two teams were evenly matched as they traded points on both sides of the court.

The first half ended with the Knights up by four against the Spartans, 23-19.

Their third place victory in the tournament was led by Malone-Boyd, who came off the bench and went 8 for 9 from the field and scored a team high of 16 points, grabbed seven rebounds and recorded two steals.

“I thought we stayed composed and we played as a team – we ran our offense really well (against MiraCosta) and we also had better communication on the court,” Castillo said.

At the end of the game, Castillo was named to the all-tournament team – In the tournament, Castillo recorded a total of 33 points, 19 assists, 20 rebounds and five steals to help lead the team to their best finish in a tournament this season and improve the team’s overall record to 3-5.

“I think this was a great growing experience – we played some really good teams in this tournament and I’m actually proud of the way we finished,” said Head Coach Andrea Aguilar.

Aguilar went on to express that the previous tournaments the team competed in really helped the Knights to come out stronger for the Knights’ Colbert Classic.

The team’s next home game will be on Jan. 9 against Southwestern College at 5 p.m.