Cool as the other side of the pillow

For the second consecutive year, the men's basketball team advances to the playoffs 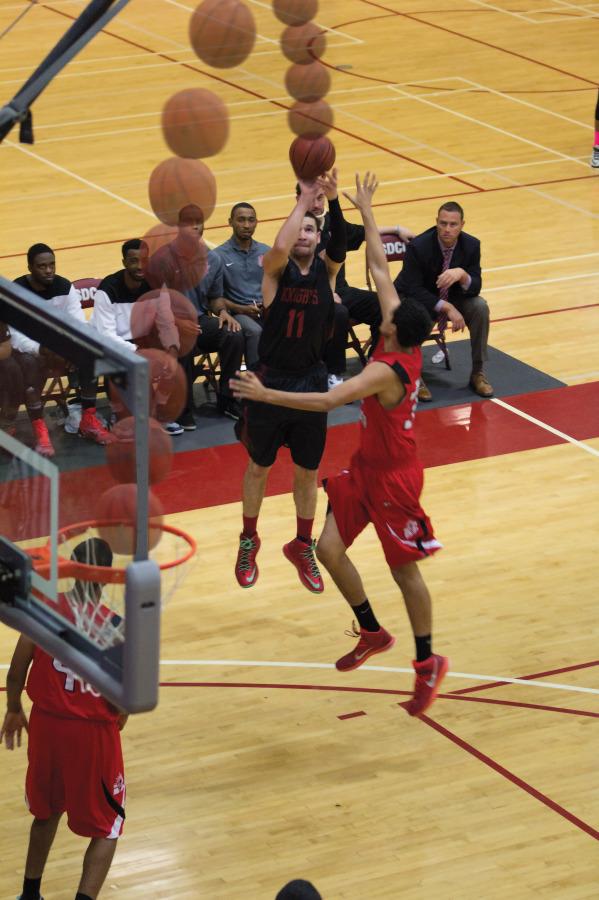 In the last home game of the regular season, the San Diego City College men’s basketball team put on a show for the home crowd and lit up the scoreboard with a 108-80 victory against Imperial Valley College on Feb. 18 and extended their winning streak to eight games.

“It’s a good sign when we come out and do what we are supposed to do — handle business,” said sophomore guard Chris Burton.

Burton finished the game with a game-high of 29 points by going 11 for 14 from the field and recorded seven rebounds and had two blocks in the win.

This was Burton’s 22nd game of scoring in double figures out of 28 games this season and leads the Pacific Coast-South Athletic Conference with a total of 426 points.

“This was a big game, we scored over hundred and as we come down to the end of conference play and into the playoffs we are looking to turn it up – it was definitely a big win for us,” added sophomore forward Caleb Singleton.

Singleton scored 22 points in the game and went 6 for 9 from three-point territory and grabbed seven rebounds. Singleton’s sixth three pointer in the victory was his 88th in the season and his 200th of his two-year career at City College.

Singleton is ranked second overall in the state in made three-pointers with 88 out of 208. As he was excited that he nailed an impressive milestone, he remained focused on the bigger picture as a team as they look to make a big push in the playoffs and expressed what they have to do in order to win.

“We need to improve on our defense — we need to do all the little things right and our offense will come. We all can score; we have a lot of offensive threats on our team so we are not worried about that — if we can just clamp down on defense we will definitely be able to take it far into the playoffs,” Singleton said.

Although the team followed their home victory with a 70-65 loss to Southwestern College for the conference championship, which ended their winning streak and would’ve crowded the Knights as back-to-back champions, the team is still looking toward the playoffs as they begin at the end of this month. Burton expressed he has been impressed with everyone on the team.

“Every freshman we have has come in and played an essential role on the team. For a couple of games we had a total of eight players and now we have nine so there is no time for anybody to be a rookie, freshman or even a sophomore — everyone has stepped up and played great throughout the whole season,” Burton said.

With an overall record of 20-9, it is the fourth time in the 11 year tenure of Head Coach Mitch Charlens on reaching the 20-win mark in a season.

As the Knights prepare for the playoffs, they will be looking to perform better than they did last year as they lost in the second round against Chaffey College.

Burton went on further to express that although the team is winning, there is always room to improve on both sides of the court as they prepare for the playoffs and with the most of the team having experience last year he hopes they can continue their impressive season.

“Last year was a new team; we were all new and it was a young squad put together and we still did well and meshed pretty well but this year we have seven returners and we have been together for a long time now and we don’t want it to end,” Burton said.