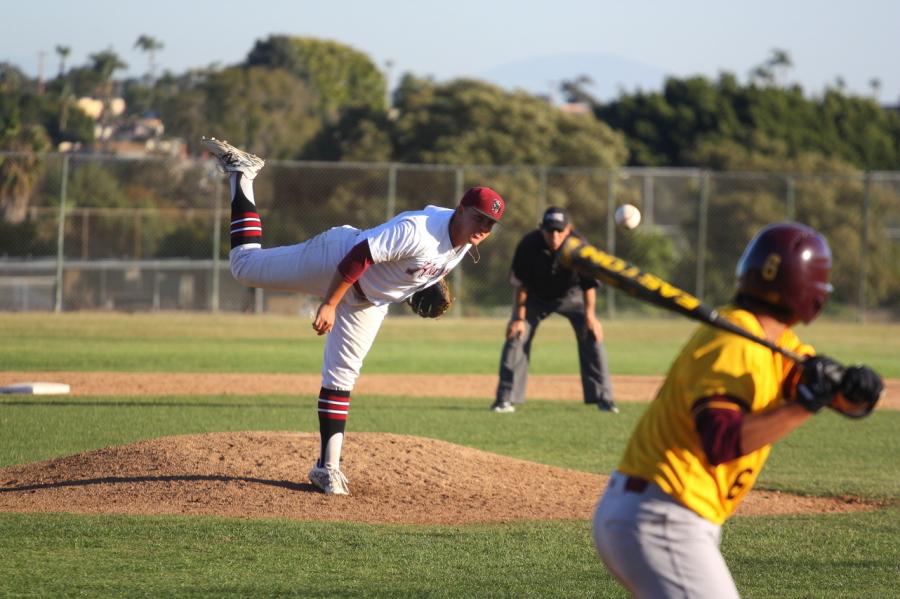 In the top of the ninth inning, Knights sophomore pitcher Kyle Peeler seals the 6-0 victory against Southwestern College by striking out Sammy Perez on Feb. 24 at Morley Field. Photo credit: David Pradel

Through nine innings of play, sophomore starting pitcher Kyle Peeler led the Knights Baseball team to a 6-0 home victory against Southwestern College by throwing a complete game shutout with three strikeouts on Feb. 24.

“(Going for the complete game) was in the back of my mind, I was just trying to get a win for the team. With this group of guys — I love these guys, I got their backs and they got my back,” Peeler said.

In the win, Peeler faced 38 batters and only allowed eight hits during the team’s first home conference game against the Jaguars.

Peeler further expressed how he wouldn’t have been able to get the win if it wasn’t for the defense.

“I have so much trust in our defense right now; they are awesome and played one hell of a game,” Peeler added.

In the game, it didn’t take long for the Knights to get on the scoreboard as freshman Christian Broussard sent the ball flying for a lead-off solo home run that was able to stay inside the left field foul pole in the second inning.

“What helped me out a lot is what Coach Keegan; our first base coach told me ‘sick curveball adjust fastball you got quick enough hands’ and that is basically what I did,” said Broussard. “… I was able to put a good swing on the ball and basically let my swing do what it does and the ball just kept going.”

Following Broussard’s homer, the Knights were able to get the bases loaded and with only one out in second inning, freshman Kiki Leyva hit into a fielder’s choice that took out freshman Dylan Pletsch at second base but brought sophomore Ricky Kliebenstein home for the score and to take a 2-0 lead.

In the fifth inning, Pletsch opened things up for the Knights as he singled to right field and after one out from Leyva that moved Pletsch to second, sophomore Ray Jones hammered one to left field that brought Pletsch home for the score.

With two runners on base following the score, sophomore Gabriel Santana was able to hit one to center field that brought Jones in for the score and right after that, Broussard was up and kept the streak alive for the Knights by hitting one down the center. Freshman Scott Martinez was able to score from Broussard’s hit and later in the inning with two outs and with Santana and Broussard still on base, Kliebenstein singled to center field that brought Santana home for the score and for the 6-0 lead.

With a total of six hits and four runs in the fifth inning, the Knights were able to propel themselves to a comfortable lead and with Peeler on the mound, the Jaguars never had an opportunity to score as Peeler left a few stranded on base in the final four innings.

“Today, we did a pretty good job of getting runners on and moving them over but I think that is what we’ve been struggling with lately and can improve on but other than that we are playing pretty well right now,” Peeler said.

“At the end, (our coaches) said that we could pick up the pace a little earlier and get the starting pitcher out sooner and how we shouldn’t settle and need to keep working harder,” Broussard added. “I think today we had a lot better timely hitting. We scored a lot more runs than we did in the past three games and I think today we finally gelled and came together.”

With the victory, the Knights improved their overall record to 7-4 and are now 1-1 in the Pacific Coast Athletic Conference.