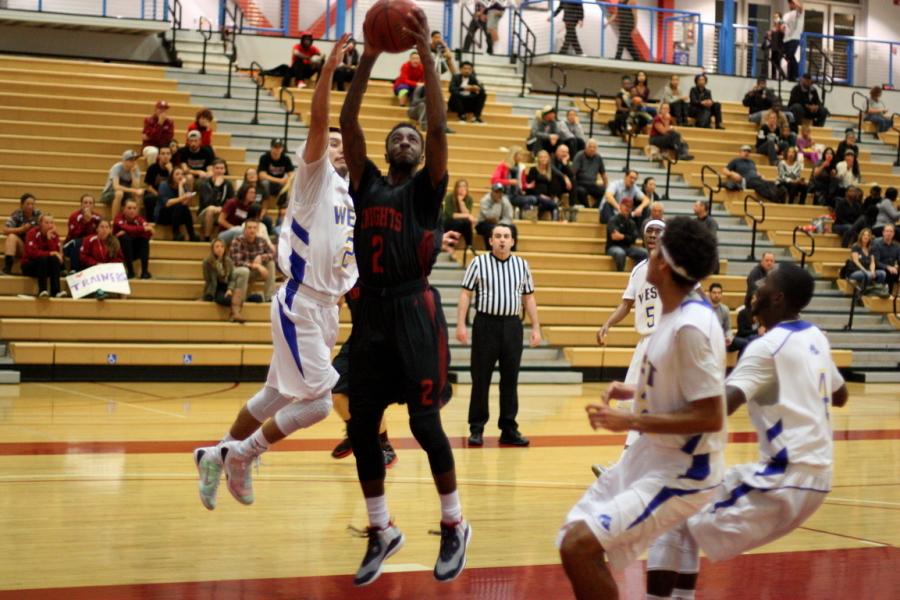 During the first half of the second round of the CCCAA Southern Regional Playoffs, freshman Marcus Brumsey goes up to get two points in the paint against West L.A. on Feb. 27 in the Harry West Gym. Photo credit: David Pradel

With eight seconds ticking down on the clock, Knights sophomore guard Chris Burton goes up from three-point territory for a chance to tie the game at 74 against West Los Angeles College; the final seconds run down to hit zero, Burton’s fade-away three misses the mark as the final buzzer echoes through the silence of the home crowd.

The scoreboard read 74-71 and in the second round of the Southern California Regional Playoffs, the San Diego City College men’s basketball team’s season came to an abrupt end after losing to West L.A. on Feb. 27 at the Harry West Gym.

“This was really tough … A real tough way to go out like this. This one hurts,” said sophomore guard Caleb Singleton.

It was an emotional scene in the Knights locker room — their journey had ended and the frustration and sadness could be seen from the players and coaches as they were inches away from pulling off a comeback win against the Wildcats.

The 11th seed Wildcats had the number sixth seed, the Knights on their toes and playing from behind early on in the game as they were able to nail seven out of 13 three pointers in the first half. Within the opening minutes, West L.A. led 17-6 and as the Knights were looking for answers and a way to stay in the game, it was freshman guard Marcus Brumsey Jr. who came off the bench and caught fire by scoring 14 points in the first half.

As the first half ended with the Wildcats up 35-25, Brumsey was the spark the Knights needed to stay within striking distance.

“Marcus stepped up really big for us and he got us a lot of buckets in the paint and you can expect him to be a leader next year for the team; if he decides to stay — I am not really sure but he was big time for us on the court,” Singleton said.

The second half picked up the same way the game began; West L.A. once again caught fire from downtown and extended their lead to 50-34.

Aside from Brumsey being a silent assassin and finishing the game with a team-high of 20 points, sophomore guard Jumah Stutton came off the bench and recorded 15 points alongside sophomore starting point guard Christian Jones who got to the foul line multiple times and finished the game with 14 points and six assists.

As City College trailed 63-47 with eight minutes remaining, Burton sparked a 20-4 run after sinking in a three. The Knights caught fire and within a span of seven minutes, the Knights rallied back after being down 17 points to tie the game at 67 with a layup by Burton. Burton finished the game with 15 points.

But the Knights’ comeback wasn’t enough; with one minute remaining it came down to free throws. City College had to foul and West L.A. led by guard Brandon Hood was able to knock them down and made it harder for the Knights to completely take over.

After the game, Head Coach Mitch Charlens delivered an emotional speech to his team on them not defining their journey by one game but by looking at their overall accomplishments and the brotherhood they have created over the past two years.

“The highlights (with this team) have been the last two years because most of these guys are sophomores. Winning conference last year and having two 20-wins season two years in a row and going to the second round of the state playoffs both years and having so many guys making first team all-conference, winning tournaments and highlights of beating great teams,” Charlens said after his speech.

“We can’t let our last game define our entire journey — (we got) to think about all the positives and all the great moments and hopefully in time because now this is going to hurt too much but hopefully in time they can look at it in its entirety and not being defined by simply their last game,” continued Charlens.

It may not have been the way the team wanted to end their journey but as they move onto their next — they know that they are not quitters.