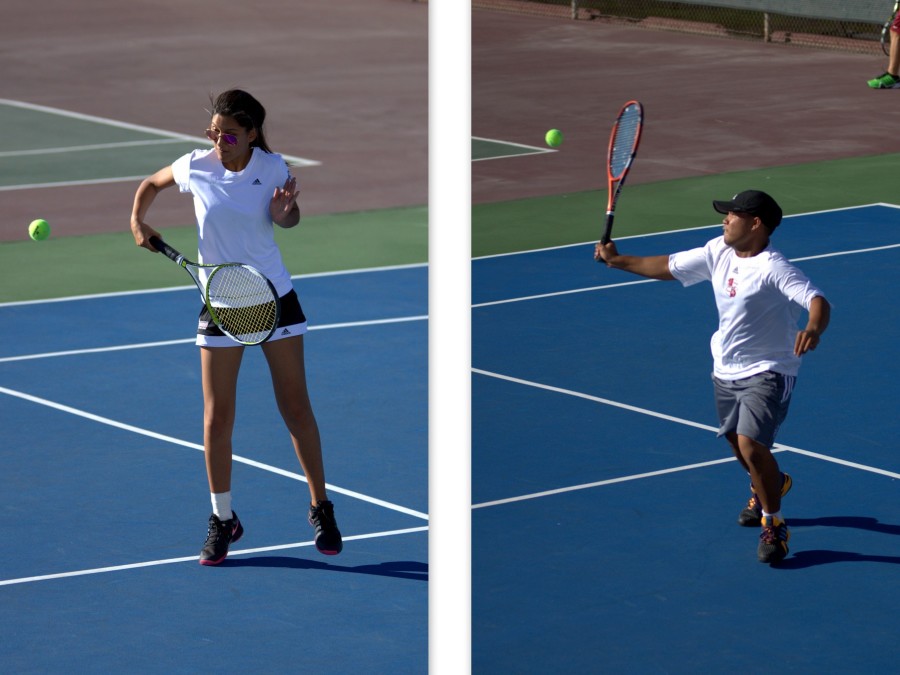 Freshman Jordann Hernandez (left) and freshman Dale Guiterrez (right) both lead the Knights women's and men's tennis teams as the second half of the season swings into action. Photo credit: David Pradel

As the tennis season swings into its halfway point, the men’s and women’s tennis teams at San Diego City College are looking to make a strong push to add more wins to their overall record.

The women’s tennis team sits in fourth place in the Pacific Coast Athletic Conference with an overall record of 2-5 and a conference record of 2-4. The women’s tennis Head Coach, Jami Jones expressed that over the course of the season, the team has reformed their doubles teams and have been working hard and have built great team chemistry with each other.

With the freshmen filled team, freshman team captain Lydia Teal expressed that with most of the players having played at the high school level, it is just a matter of time that they build off the fundamentals of the game and the wins will come.

“A lot of players have been making a lot of improvement on their shots and a lot of hard work is going in at practice. We are heading in the direction and I am very optimistic about the second half of the season,” Teal added.

The men’s team has also struggled on winning matches, as they sit in sixth place in the PCAC with an overall record of 3-12 and a conference record of 2-6.

Assistant Head Coach Eric Mann expressed that the young team, that features seven freshmen and only two sophomores are improving as the season comes along but recently have been plagued with multiple injuries.

“A lot of our players are injured — so they have trouble holding up at practice and cannot serve a lot because they have injuries to their elbows and shoulders. So we can’t work on serves as much as we would like at practices but hopefully as the season comes along they can recover a little bit and get healthier,” Mann said.

With seven matches left in the season, the team is trying to make a comeback and win some matches and also just like the women’s team, to hopefully have some players make it to the SoCal Regionals.

With the injuries to the players, Mann went on further to say that at practices they are working on all the little things to make sure the team improves for the upcoming matches.

“We are progressing, everybody is progressing and we are looking confident for the upcoming matches. (Sophomore) German Ziella and I are also making sure we help out with the freshmen in any way we can and try to cheer them on — it’s been great to see them progress this season,” said sophomore David Lin.