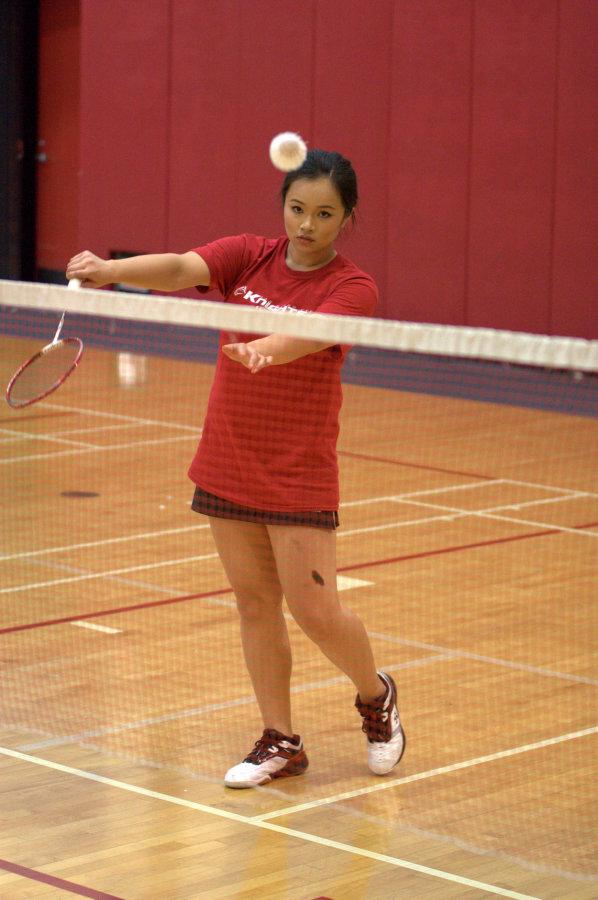 During the last round of the home opening match, sophomore Cassandra Ka serves the birdie over the net against Grossmont College on March 4 in the Harry West Gym. Photo credit: David Pradel

The women’s badminton team picked up where they left off last season by capturing their 23rd consecutive Pacific Coast Athletic Conference victory by defeating Grossmont College 21-0 on March 4.

“We came out here ready to compete and we have been practicing hard in the past months so as we came into this match, we were all thinking that we were going to win and we did,” said sophomore Gina Niph.

In the match, both teams play a total of four rounds: two rounds of singles matches and two rounds of doubles matches and play to the best out of three sets. Once the Knights took the first round of the singles and doubles, the team was in a comfortable 10-0 lead and never looked back.

“For today’s match, this was a little step as we look to take every match as a way to get back to where we were last season. (Grossmont) is a pretty well balance team but they’re not a top team so I want our team to know after this match that they can step it up a little and work harder as the season move forward,” said Head Coach Son Nguyen.

“We are getting ready for Pasadena College, I did some research and they are a very good team this year and that is our target right now. In order for us to get better, the girls need to play more aggressive and practice even harder,” Nguyen added.

At practice, the Knights are working on their chemistry and learning how to work together in the doubles matches. Nguyen believes if they can learn how to play together during doubles, it will boost their confidence when they move into the singles matches.

In the victory against Grossmont, Nguyen was pleased on how well the doubles teams played and hopes they can continue to get stronger in the upcoming matches.

Niph expressed that over the past months, she and along with her teammates are also working on their mental game and are focused on getting back to the state match after losing to De Anza College, 19-2 last season.

“Practice this year was a lot harder, I know personally and along with the other sophomores have been working hard to get back; I want to win state this year and I am hoping that all of our effort that we put into practice will get us back to the state match,” Niph added.