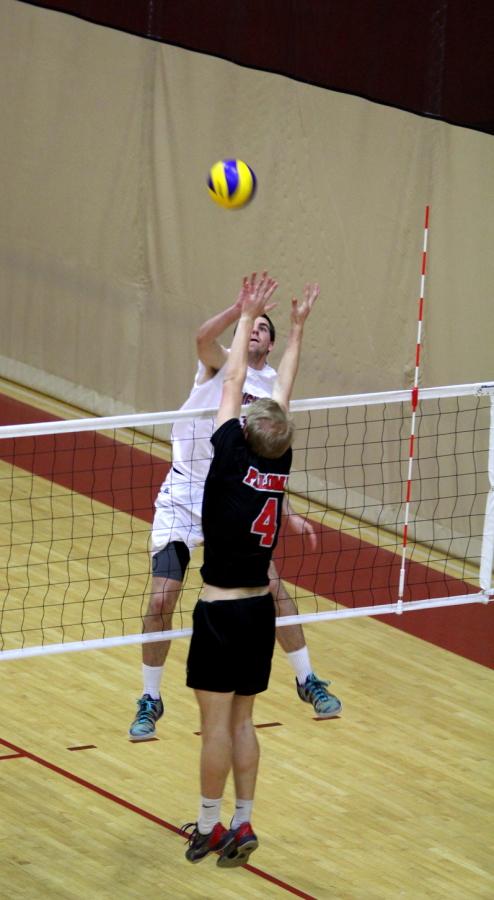 Freshman outside hitter Lucas Timm goes up to hit the ball against Palomar College freshman David McGuire during the third set of the match on March 13 at the Harry West Gym, where the Knights lost 3-1 against the Comets. Photo credit: David Pradel

A total of 44 kills, 60 digs and 40 assists — but it wasn’t enough for the Knights volleyball team as they were defeated at home by the Palomar College Comets, 3-1 on March 13.

“(The loss) was hard — it’s hard because we worked really hard for it and in my opinion we were definitely better than the other team. We just couldn’t execute as well as we ran things in practice,” freshman outside hitter Kyle Taylor said.

“I was very proud on how our guys fought against Palomar. It is clear that we can compete with anyone in our conference,” Head Coach Kevin Pratte added.

In the first set of the match, both teams were flying with energy and were trading points back and forth until the very end where the Comets narrowly pulled out with a 25-23 victory against the Knights. But in the second set, the Knights were able to continue their strong start with great serving, digging and sending hard hitting kills to Palomar’s defense.

The Knights were able to strike back by getting the 25-16 win in the second set.

However in the last two sets, the Knights were unable to continue their offensive rhythm and by making crucial errors, the Comets were able to take advantage and took a commanding lead.

Although the Knights were able to create a small rally within the third and the fourth set, it wasn’t enough as Palomar seemed to have the edge against City at the battle at the net. The Comets took the final two sets: 25-17, 25-23.

“We played well throughout the whole game; we just let them go on too many runs and if we can limit our errors and limit their runs, I think we will be fine in the (upcoming matches),” freshman outside hitter Lucas Timm said.

In the match, the Knights committed a total of 22 attacking errors and 13 service errors.

“Unfortunately, when Palomar missed four serves in a row in set four we were not able to take advantage of their mistakes. There were times in sets one and four were we could have built a large lead. Instead, we let Palomar hang around and they went on impressive runs late in sets one and four,” Pratte added.

Although the Knights were defeated, in the match three players recorded over 10 digs. Timm and freshman Jordan Walley each recorded 12 kills and Walley finished the game with an impressive .308 hitting percentage.

As the volleyball season winds down for the men’s team, Taylor expressed that he believes the team can make a strong push in the Pacific Coast Athletic Conference.

“There is a lot to be proud of, but I feel our young squad is capable of pulling a few upsets in the second half of the season,” Pratte added.

The next home game for the Knights will be against Golden West College on March 27 at 6 p.m. at the Harry West Gymnasium.