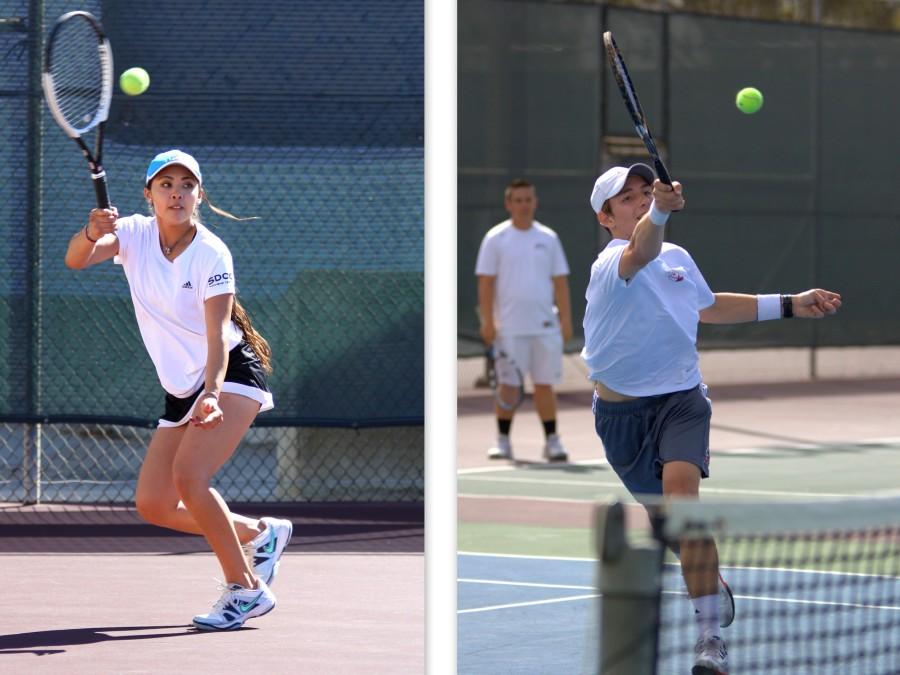 With the tennis season in its final matches for both the men’s and women’s tennis teams, the anticipation of qualifying for the SoCal Regionals are high for the Knights as it is just weeks away.

The women’s tennis team currently sits in fourth place in the Pacific Coast Athletic Conference with an overall record 3-8 and a conference record of 3-7. Although the team has recorded more losses than wins, the team still has a good chance on having their top six individuals qualify for the SoCal Regionals in April.

Freshman team captain Lydia Teal expressed that the team is strong during the singles round but they still need to improve while playing in the doubles round.

“When you play doubles, it really depends on communication between you and your partner and knowing where each other are on the court. At practice we are really working on doubles, our singles is really strong but there is always room to improve,” Teal said.

“In comparison to end of January to today, there has been a ton of improvement. I wish the season was actually a little bit longer because I see everyone is constantly improving and their building upon everything that they have learned and are getting better,” Teal continued.

For the men’s tennis team, with an overall record of 4-15 and a conference record of 3-9, the team currently sits at sixth place in the PCAC but still has hopes on sending some players to the SoCal Regionals.

“In a previous interview I said that our goal is to qualify to Ojai. And at the time it was a goal objective that we were trying to get and know we don’t take it for granted but I am pretty sure that most of the team will be in Ojai,” sophomore David Lin said.

Lin went on to say that the team’s No. 1 singles player, freshman Sebastian Villalba, has been leading the team but is currently battling some injuries.

“He has been playing some amazing tennis, but he still can have better results I believe. He plans to continue to work harder to achieve more victories,” Lin continued.

Both the teams have two more matches remaining and will have a few weeks to get healthier and recover for the SoCal Regionals in the middle of April.