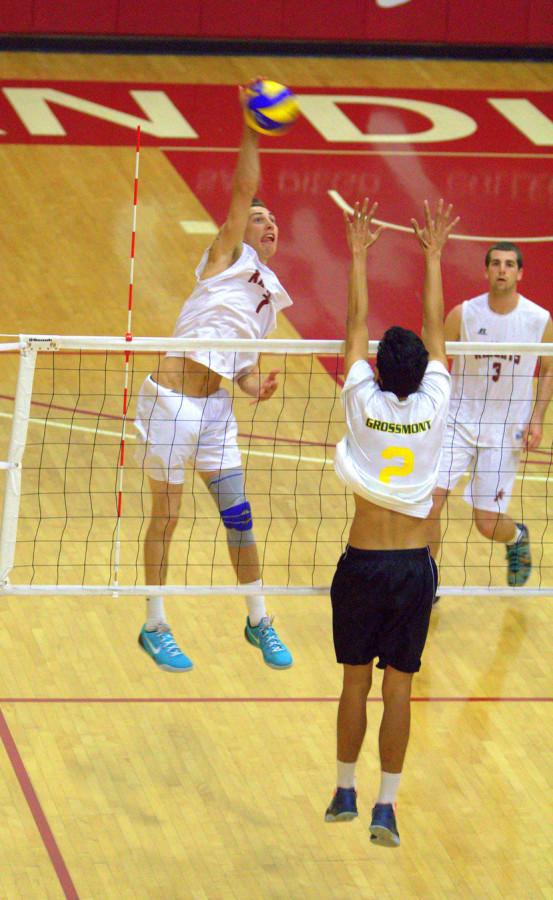 Freshman outside hitter Kyle Taylor goes up to send his hard-hitting kill during the fourth set against the Grossmont College defense on April 10 at the Harry West Gym. Photo credit: David Pradel

With a 21-20 lead in the fourth set, the San Diego City College men’s volleyball team couldn’t extend the match to a fifth set against Grossmont College as they went on a 5-0 run to seal the 3-1 victory against the Knights on April 10.

The loss against the Pacific Coast Conference leaders during the final game and home game of the season moved the Knights overall record to 4-16 and a conference record of 3-11.

“Tonight we gave it all we had on the court — I don’t think anyone can say that they have any regrets on any of the plays but we definitely came back and it would’ve been nice to get the win but this is part of the game and it happens,” freshman middle blocker Zach Kramer said.

Kramer finished the match with five kills, four blocks and recorded nine points. It was a rocky start for both teams during the first set with several errors on the court that gave the opportunity for either team to take advantage of. But as the set continued, the Griffins were able to capitalize late from a few crucial errors from the Knights as they grabbed the 25-20 win.

However, in the second set, the Knights were able to bounce back against the 13-1 conference powerhouse team. The Knights were firing on all cylinders and were in their top form.

“Grossmont is a great team and I felt we played them very tough. It was disappointing that we started the match off slowly, but I like how we responded in set two. When this team passes well and sets well than we allow our physical hitters to take over the match,” men’s volleyball Head Coach Kevin Pratte said.

McAdams finished the match with an impressive .600 hitting percentage and had zero hitting errors to go along with his nine kills and 11 points.

Following the second set, the Griffins fired back and limited their errors against the Knights. Grossmont was able to get back into rhythm with strong hitting and defense and went on to win the third set 25-18.

“Last time we played Grossmont it was nothing compared to this time. During the second set we played with our hearts out and it was great but at the end we just had to limit our errors. It was a lot better compared to last time and was a heck of a match to end the season,” freshman outside hitter Jordan Walley said.

The Knights finished the season in seventh place in the PCAC, although on paper by looking at the team’s overall record it does not represent the talent on the team, as Coach Pratte expressed.

“We are an all freshmen squad, with the exception of sophomore libero Luis Nunez. Many of our freshmen starters are getting looked at by division one schools. They have a difficult decision ahead of them. My coaching philosophy is to do what is best for the student-athlete. If some of our guys want to jump at the chance to be division one athletes, I will be very proud of them,” Pratte said.

Pratte continued by mentioning a few universities like UCLA, UCSB and Ohio State have expressed interest on several of the Knights players.

“If we return all of our freshmen and bring in a solid recruiting class I feel that we can field a competitive 2016 squad,” Pratte added.