Crackle of the bats 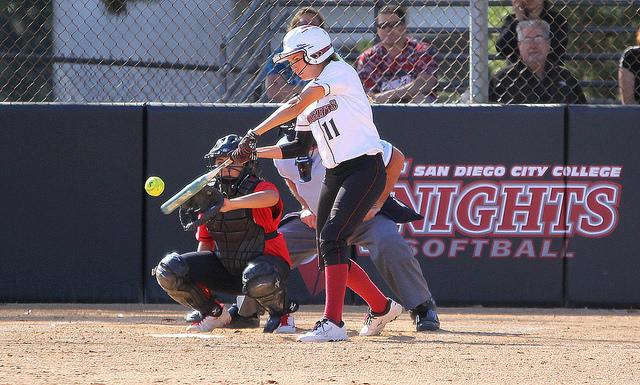 Sophomore shortstop Katie Dowdy hits the ball during the sixth inning of the home game against Mt. San Jacinto College on April 10, where the Knights lost 4-1. Photo credit: David Pradel

As cars drive by with their roaring engines past the Betty Hock Softball Field, the Knights softball team would be the car with engine problems. In this case, with a 9-24 overall record and a 3-14 conference record, it has not been the season the Knights were hoping for, but despite the engine problems, the team has not pulled over as they still have more wins left in the tank.

On April 8, the Knights were able to snap their four-game losing streak with a walk-off single from freshman catcher Malin Ellstrom against Imperial Valley College. With the game tied at two in the bottom of the seventh inning and after a sacrifice bunt from freshman Dalen Dull that moved freshman Paola Camargo to third and freshman Alex Galatis to second base, Ellstrom came up to bat and was able to hit a shallow single to center field that brought home Camargo for the winning run.

In the victory against Imperial Valley, Galatis went 4-4, recorded two RBIs and cranked a home run to left field that gave the Knights a 2-1 lead in the bottom of the third inning. With her strong performance and with an impressive .412 batting average in the season, the freshman third baseman was named the Pacific Coast Athletic Conference Athlete of the Week on April 13.

Following their victory, however, the Knights softball team couldn’t continue their momentum against Mt. San Jacinto College on April 10. The Eagles had a commanding 4-0 lead going into the bottom of the seventh inning over the Knights. It wasn’t until then where the Knights got on the scoreboard with a RBI from freshman centerfielder Maricella Turrado that brought starting freshman pitcher Micela Ross for the score.

Following the run from Ross and with two outs, the Knights were able to get the bases loaded after Galatis was intentionally walked to first base. After the Galatis walk, Dull was up to bat but unfortunately couldn’t come up clutch for the Knights as she lined out to center field to end the game with the Eagles pulling out the 4-1 victory over the Knights.

After the loss against the Eagles, Turrado and freshman second baseman Kimberly Rodriguez both agreed that in order for the Knights to pull out some wins they need to get the hits in order to move runners over on base.

“I think in order for us to finish the season strong we need to change our mindset. We need to believe in ourselves and come out and put in more effort. When we come up to bat, we need to go up with more confidence and we will get those hits and once those balls start dropping we will get those runs in,” Rodriguez said.

Although with the losing record, Turrado went on to say that the team overall has improved a lot over the course of the season.