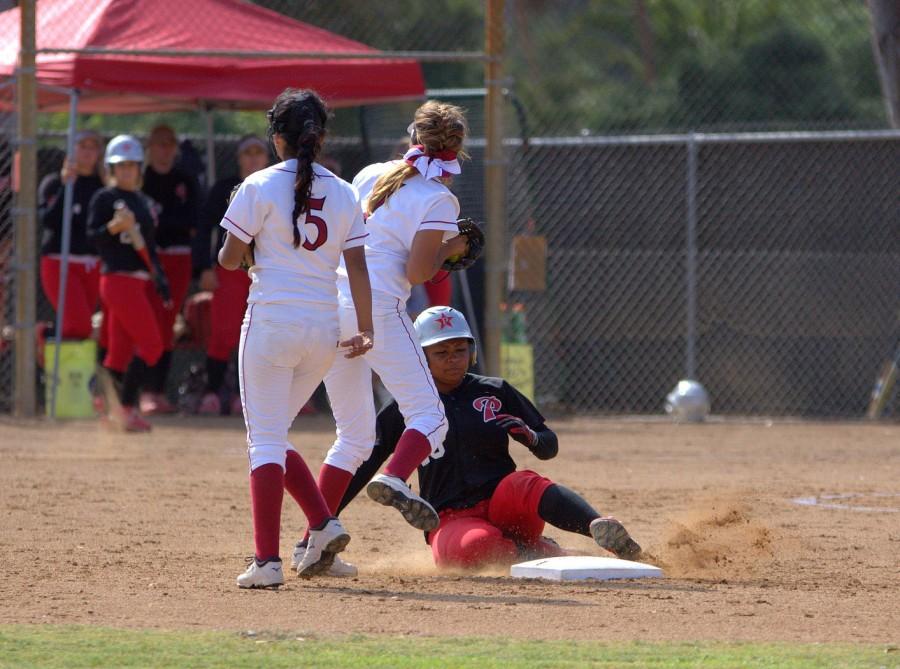 Palomar College freshman third baseman Iesha Hill slides to second base during the fourth inning at the Betty Hock Softball Field on April 21 where the Comets got the 14-0 victory against the Knights. Photo credit: David Pradel

Five runs in the first inning, two runs in the second, six more in the third and one more run in the fifth and the game is called with a 14-0 Palomar College lead and no signs of the Knights softball team getting back in it — the Comets hand the Knights a loss in their final game of the season on April 21.

Against one of the top teams in the state, the Knights finished their season with a 9-28 overall record and a 3-15 Pacific Coast Athletic Conference record.

“Our win-loss record is completely disappointing. I personally don’t think it represents the talent that we have on this team but numbers don’t lie, so it is what it is,” Taylor continued.

In the game alone, the Knights recorded a total of four hits versus Palomar’s 16. The Knights were unable to find their groove out on the field offensively and defensively as they recorded some crucial errors that allowed a few runs to slip by at home plate.

In the first inning with a 2-0 lead, Palomar’s Kristina Carbajal cranked a three-run home run to give the Comets a comfortable 5-0 lead. Following Carbajal’s home run, in the second inning, Palomar’s Kali Pugh homered one to left field to add two more onto the scoreboard.

With a 7-0 lead, the Comets continued their hot-hitting at the plate in the third inning. The Comets were able to get four more runs against Knights starting pitcher Micela Ross. With an 11-0 lead, Taylor made the pitching change and freshman Ivana Gonzalez came in.

Although Gonzalez was able to send some strong pitches down the line, it wasn’t enough as the Comets had the upper hand at the plate and were able to get on base.

Gonzalez allowed two more runs in the third inning and the Comets went on to win and added another win to their 33-3-1 overall record and 17-1 PCAC record.

It was not the season the Knights had in mind, but as sophomore outfielder Charlotte Guerrero expressed, over the course of the season, the  team’s chemistry definitely improved.

“I feel like in the beginning of the season (our chemistry) was a little cliquey, but towards the end we definitely came together strong and finished as one cohesive unit,” Guerrero said.

“Every single girl on my team improved. … They improved from their range, to their arm strength, to just having better at bats but unfortunately that wasn’t reflected in our win-loss record but I know it as a coach and hopefully they know it as players,” Taylor added.

Taylor went on to say the nine freshmen on the team were able to get valuable playing time throughout the year and with the incoming recruits for next season, she hopes the 2016 season will be able to reflect the talent on the team more positively.