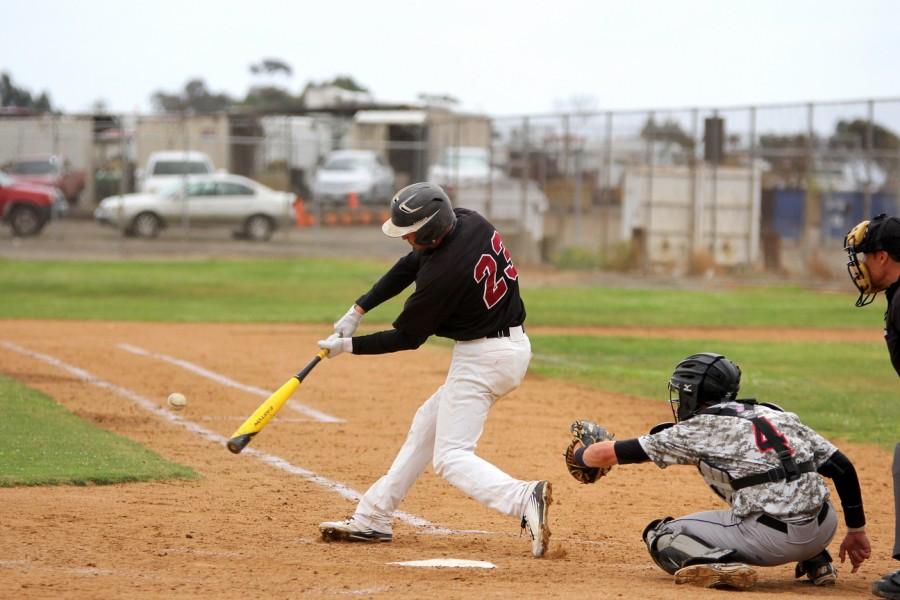 Freshman outfielder Tyler Flores hits the ball in the bottom of the third inning against Mt. San Jacinto College on April 24 where the Knights got the 6-3 victory against the Eagles in the final game of the season. Photo credit: David Pradel

Through nine strong innings of play, the San Diego City College Knights baseball team got the job done on the mound and at the plate as they defeated Mt. San Jacinto College 6-3 on April 24 to end their season with a 14-19 overall record and an 8-16 Pacific Coast Athletic Conference record.

“It was great — we all competed and it was a good pick-up from last game because we lost 2-1 (against Mt. San Jacinto College) and it was just a battle so it was nice to come out guns blazing and get on top quick. … I am really proud of everyone,” sophomore catcher Cory Russell said.

The Knights were able to score four runs in the second inning and followed with two more runs in the fourth. From then on with the score at 6-1, the Knights were in control and were in rhythm on offense and defense. The players were catching all that went their way and at the plate, the Knights were hitting strong to move runners over or were smart to not hit at all and get the walk.

With the win in the team’s last game of the season, the Knights capped off their season by winning the last five out of six games against Imperial Valley College and Mt. San Jacinto College.

The Knights found themselves in a seasonal slump midway through the season but were able to overcome a 13-game losing streak to finish their season off strong and, as Russell expressed, the sophomores on the team didn’t focus on the teams win-losses but rather were focused on going out and giving it their all each game.

“It was a hell of a ride. … Every single one of these guys did their best. They went out and gave it their all and left their emotion on the field, their heart on the field and as a leader on this team I am so proud of every one of them and it was a great way to go out with the W,” Russell added.

In the victory against the Eagles, Russell was able to hit two doubles, drove in two runs and scored a run at four at bats for the Knights. Sophomore third baseman Gabriel Santana went three for three with two doubles, an RBI and a run. Sophomores Ray Jones and Joe Lavin each recorded an RBI, as well.

The Knights starting pitcher, sophomore Kyle Peeler, brought the heat from the mound as he recorded four strikeouts and allowed one run off of seven hits after facing 26 batters through seven innings of play.

“Coach pretty much just told me ‘go out and do what you do best,’” Peeler said. “I am going to miss these guys. We battled and went through some adversity — these guys are the best and I love them all.”

“We really came together as a team. We finished strong and on a good note as everyone contributed and the guys who don’t really get to play got a chance to and they came out and proved themselves which was awesome to see,” sophomore shortstop Ricky Kliebenstein said.

The Knights will hopefully have their 19 freshmen return and compete for the top spot in the PCAC, as Peeler expressed that the team has a lot of talent and knows with the coaching staff and new recruits the team will improve and will be ready for next season.