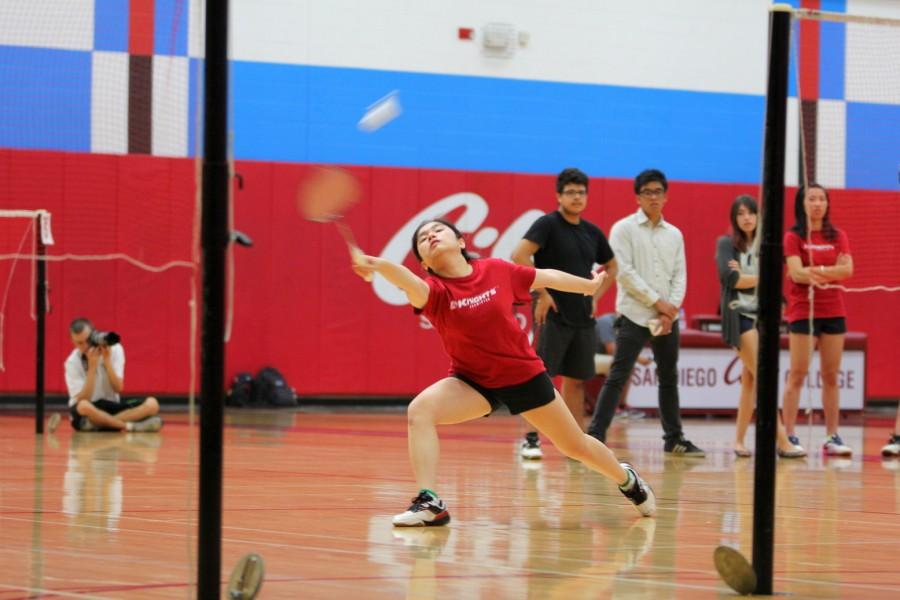 During the first round of the doubles matches, sophomore Trinh Lang reaches out to hit the birdie on April 29 against Pasadena College. The Knights went on to beat the Lancers 11-10 in the Southern California playoff match held at the Harry West Gym. Photo credit: David Pradel

In a nerve-wracking game against Pasadena College, the San Diego City College badminton team narrowly defeated the Lancers 11-10 and once again were named the Southern California Champions on April 29.

In a prior home game against Mesa College, Head Coach Son Nguyen explained the regional playoff game against Pasadena College would be the biggest challenge of the season.

Pasadena already won the South Coast Conference earlier in April and had a record of 13-0. They were assumed to be more aggressive and a challenge to the Knights from stories heard of their victories against other schools and after witnessing them play at the Mesa College Tournament in March.

Although the Knights also had an undefeated record (6-0) prior to playing Pasadena, they were still nervous about the matches against the Lancers.

Each match was nerve wrecking for the Knights. They weren’t able to dominate the court as easily as before. Pasadena wasn’t easy to beat as the team scored only a few points. In the first round of the singles match, the girls scored a couple points and with a score of 2-4 after the first round, it wasn’t hard to tell that the Knights were facing an uphill battle against the Lancers.

Nguyen noticed the girls were anxious and explained they could have scored more if their nerves weren’t built up: “The first round of singles we could have won more, but we only pulled out two points. That’s because a lot of our players got really nervous playing against this team.”

Sophomore Cassandra Ka won the first singles match 21-18, 21-15 against Carmina Ortiz. It proved to be an easy match for Ka as it was one the quickest matches. Freshman Margaret Do also won the match against Ying Wen Lin 21-9, 21-15.

However, Ka’s partner for doubles, sophomore Gina Niph struggled to win. Her competitor, Rebecca Tzou was more aggressive and controlled the birdie better. During the first set, Niph is wiped out by Tzou and lost 16-21, 21-13, 21-15.

In previous games, the Knights were able to lead with more points, but the girls struggled to win matches. After the first sets of singles and doubles, the score was almost even 5-6, Pasadena in the lead.

Throughout the entire game, both teams performed their best and gave all that they could. The Knights slowly gained aggression which lead them to more points. In the third round of singles, the girls picked up the pace and were more aggressive. The Knights were able to grab four points and take the lead in the match.

However, it all came down to the last doubles round and with the score at 9-8, City in the lead. The Knights had to win only one more match to win it all and advance to the state championship.

Besides the constant cheering on the sidelines from teammates, the only noise heard were the grunts of serves and swish sounds from the rackets hitting the birdies. All of the players on the court were tired as their faces were flushed red and sweating from playing earlier matches. They were all exhausted but ready to win.

But it came down to the last round as freshmen Thao Le and Shessira Paredes led the Knights in a 11-10 victory. They weren’t aggressive, and often dropped the birdie, but they were able to win against Mendez and Carmina Ortiz 21-11, 21-13.

The Lancers weren’t as prepared as Le and Paredes. Their coordination and communication was off, and didn’t appear to take the match seriously as the Knights.

The women’s badminton team will travel north for the state championship against DeAnza College on May 7 at Irvine Valley College.