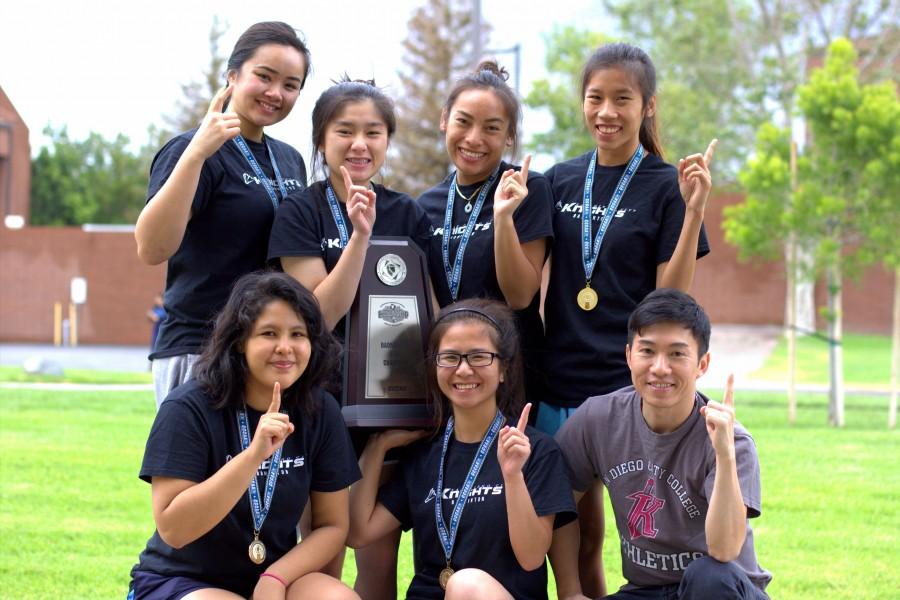 “All I can think was just to not cry but then I was like ‘No! I am going to cry’ then I ran over to (Gina Niph) saying ‘We did it!’ And we were so ecstatic and relieved — I don’t think I will ever forget this moment,” sophomore Cassandra Ka said as the San Diego City College badminton team was crowned the 2015 California Community College Athletic Association State Champions on May 7 at Irvine Valley College.

After losing to De Anza College in 2013 and 2014 in the State Title Match, the Knights were able to strike gold in dramatic fashion by narrowly defeating the Dons 11-10.

“I would have to say this match was the closest match ever in my coaching career,” badminton Head Coach Son Nguyen said.

Through two rounds of singles and doubles matches, it all came down to the last match as the Knights were down 10-9 and all the eyes were on the No. 1 doubles team for City College, Niph and Ka.

“I was shaking so much and I was worried about my teammates as well because it all came down to our game,” Ka said.

With the hopes of winning the State Title on their shoulders, Niph and Ka were able to pull through by beating De Anza’s top pair sophomore Alice Liu and freshman Megan Hsiao (17-21, 25-23, 24-26).

“We had a game plan going in but naturally it didn’t go the way we wanted it to go because (our) doubles team we were hoping to win didn’t win. So at the end, it came down to (Ka and Niph) and knowing that they had to win it. They pushed themselves to the max and were diving all over the court to win,” Nguyen said.

After the first round of doubles, the Knights were down 6-5 with the only win coming from Niph and Ka as they defeated Fu and sophomore Jennifer Chan (21-12, 21-9).

Being down only by a point, the Knights were able to bounce back and take a 9-8 lead after the second round of the singles matches. Niph, Ka, Paredes and freshman Trinh Lang each got a win.

Entering the final round of the match and the second round of doubles, all City College needed was to win one match.

However like Coach Nguyen expressed earlier, the doubles team he thought would get the win did not. Le and Paredes lost to Fu and Chan (21-15, 11-21, 21-18) and as Niph and Ka were battling it out — the Knights were down suddenly 10-9.

“It was scary because it could’ve gone either way … and I guess our girls didn’t want to give up because they stayed aggressive the whole entire time and we pulled it off,” Nguyen added.

Niph and Ka got the victory in the team’s seventh state championship appearance under Coach Nguyen and earned the team’s fifth title.

Not only did they achieve the State Title but capped off the 2015 season with an 8-0 record.

“It was so emotional. … I was thinking I need to do this for (Coach Nguyen), for the team and it’s my last year — I didn’t think I was going to be this emotional and I don’t know what to say — I am so happy,” Ka added.

Nguyen expressed that he was nervous before going into the state match because the week before making the trip to Irvine, the team did not practice due to finals week.

“De Anza College always has good players and so going into the match our girls had to study a lot so they had no time to practice and I was nervous because they weren’t well prepared,” Nguyen added.

The time off the court may have been for the best as the Knights were able to rest and heal their injuries.

Earlier in the year before the season began, Niph expressed that the team was focused on coming back to the state match after losing to the Dons two years in a row. She predicted if the team puts the effort in they will be back at the state match and win it all — and she was right.

“All the hard work at practice and at the (conference) matches definitely paid off. We wanted to win this and we did for (Coach Nguyen) mostly because it is his last year at City,” Niph said.

In nearly 10 years at City, Nguyen has led the Knights badminton team to be a powerhouse program in the state.

According to Nguyen, he will be going back to Vietnam to continue coaching and stay with his family.

Nguyen has had one of the most successful coaching careers in the history of the City College athletics program.

His assistant coach, Darby Duprat, who is a former City Knight, will take over as head coach, according to Nguyen.

“It means a lot to me that the girls wanted to win it for me, and you know, even if they didn’t win, it was going to be fine because we made it to the state match, and I told them, too, ‘win or lose it doesn’t matter as long as you have fun and play well,’ but they really wanted to win since last year and this year they were able to take it home,” Nguyen said.