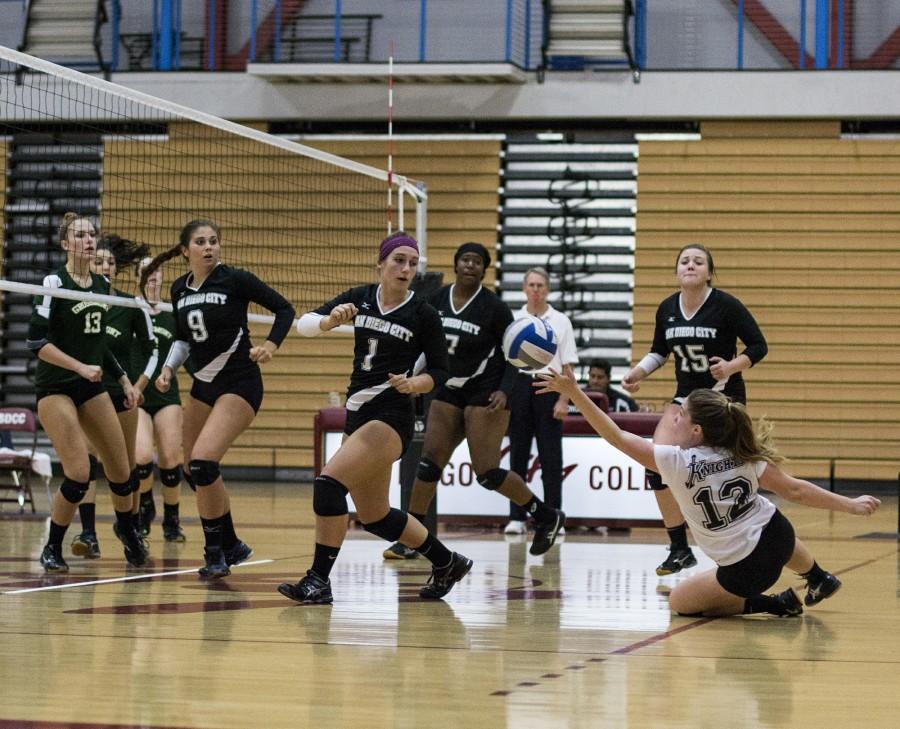 During the second quarter of the match between the Knights and Grossmont College on Oct. 2, the Knights sent the ball over the net and were met with a sharp return from the Griffins’ offense. The Knights could not control the ball and Grossmont landed a point on the unsuspecting team. Photo credit: Celia Jimenez

The Harry West Gym ended up with faces of disappointment, frustration, and pain from the San Diego City College women’s volleyball team, as the Knights were defeated 3-0 (25-16,25-23,25-16) by Grossmont College on Oct. 2.

Things started to go wrong when the Knights lost freshman middle-blocker  Julia Ferraro (21) when she got injured during the second set of the game.

“So, I went to block and I came down into my two knees and twisted my ankle.” Ferraro said.

Before Ferraro ended up walking off the gym floor with crutches and a twisted ankle, she left the game with two sets played, one kill, four total attempts and a hitting percentage of .250.

Towards the last set of the game the Knights seemed a little off maybe because they were getting upset about the previous two sets won by Grossmont.

It seemed that the knights were not ready to counter-attack when it was time for Grossmont to serve. They were getting a little behind on their positions and slow to block the opposing team’s shots.

City College ended up with a total of 28 kills, 84 total attacks, a hitting percentage of .226, 25 assists, and 48 digs and 38 points. Most of them made by freshman outside hitter Chloe Gruwell (11) and freshman Outside Hitter, Libero, Setter Alyssa Dincoff (1) also named as Women’s Athlete of the Week.

Gruwell made 12 kills, 14 digs and 13 points and Dincoff recored 12 kills, 9 digs and 6 points, respectively, out the total.

Women’s volleyball Head Coach Debe Bodnar mentioned that she is proud of the team and how they continued to push through.

“Even though one of our setters is back after seven weeks because of an injury I’m glad we did a great job,” Grossmont Head Coach Jamie Ivers said right after the match ended. “However, I don’t think our discipline is a hundred percent there yet; we need to improve more so our tempo and location can be better. We’re getting there, slowly but truly.”