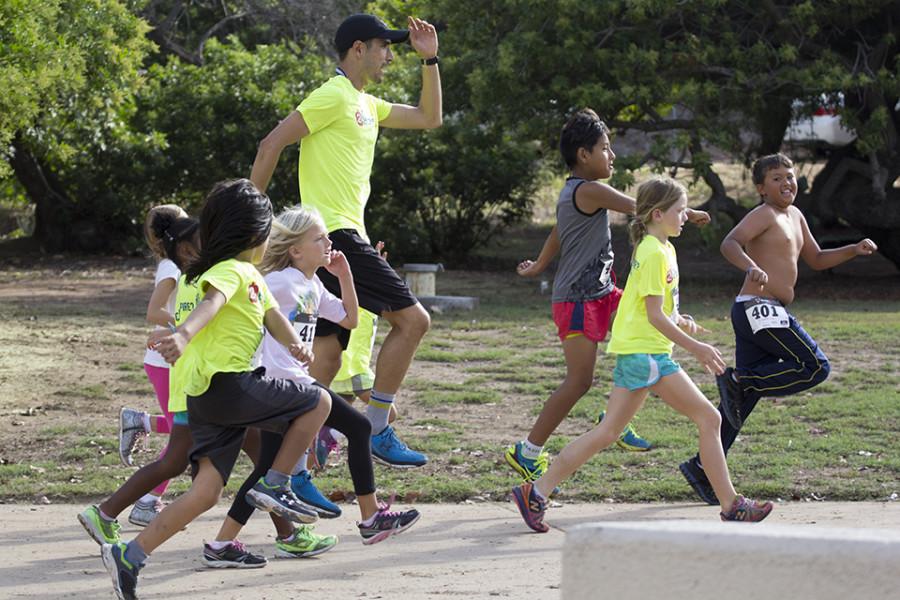 Marco Anzures, the new coach for the women’s cross counrty team, warms up with second-recess kids before the Dirt Doggies 2K Watermelon Run on Oct. 3 at Morley Field. Photo by Celia Jimenez

Marco Anzures is a San Diegan who’s had a successful career as an athlete and young coach and he now is the new Knights women’s cross country coach.

Anzures has held the position since the summer and says his coaching philosophy is based on three Ps: patience, positivity and perseverance.

“Running takes a long time to get good at at,” he says and his main goal right now is to create a team atmosphere and build his athletes’ resistance and confidence.

Anzures got involved in cross country in high school to get faster and ready to play soccer. He forgot about his soccer ambition and continued on with cross country when he found out he had potential for it. “I was pretty good at it,” Anzures affirmed.

His coach told him if he continued running Anzures would be able to go to college and run and “that was the big draw.”

He was accepted to the University of California, Los Angeles, where he got a partial scholarship and received bachelor’s degree in history while running track and field and cross country for the UCLA Bruins.

When he was a freshman his team qualified to the nationals cross country meet for the first time in 25 years and they went to the National Collegiate Athletic Association Division I Championship. He qualified on teams one more time and qualified individually during his senior year.

On track and field he made it to the top 10 placing sixth in the NCAA Preliminary Round for the10,000 meters (6.2 miles).

Anzures is also on the top five for 10,000 meters track and field at his former university, “I was fifth and still fifth all times (at UCLA). I run 29 minutes flat.”

He is married to Natasha LaBeaud, a marathon athlete who is seeking to qualify for next year’s Olympic Games in Rio de Janeiro. They met at McMillan Elite and got married in 2013 at his high school.

When he came back to San Diego, Anzures suffered a back injury and had to stop running professionally. “I wanted to stay into running” he said and decided to do something he hadn’t done before, coaching. He started as assistant coach at University City High School and enjoyed it and kept doing it.

“Marco is very committed to his athletes. He knows how to bring groups together,” men’s cross country coach Peter Gregory said.

Anzures was the head coach of cross country at Cerritos Community College. With them, the men’s team placed fourth and women’s fifth at the state championship and one men’s team placed first in the 500 meters. They are the best results combined in the college’s history since the program started.

He also coaches his wife, who has competed in the Pan American Games and the World Cross Country Championships and has a marathon time of 2 hours and 35 minutes.

“Coach Marco has good stand points on a lot of techniques and ways to get stronger and faster that I’ve never been taught before or motivated to do,” sophomore athlete Kelsey Engler said.

Anzures built up the confidence and shape of his athletes during his first season with the Knights. All of them ran their personal best time during the Pacific Coast Athletic Conference, though despite that they did not qualify for the Southern California meet. During their season, the women’s cross country runners were able to reduce their time an average of 3 minutes and 30 seconds.

But this doesn’t worry him at all, Anzures believes his athletes performed better than ever before and knows he has to keep working hard.

City College doesn’t have a track and field team, a spring sport, nor a facility on campus they can train at and the Knights’ cross country athletes are at a disadvantage against other colleges that have both.

To close this gap Anzures is planning on creating a running club next spring, through exercise science classes, so his runners can train all year around and be more prepared for their next season.