Knights foul out of playoffs 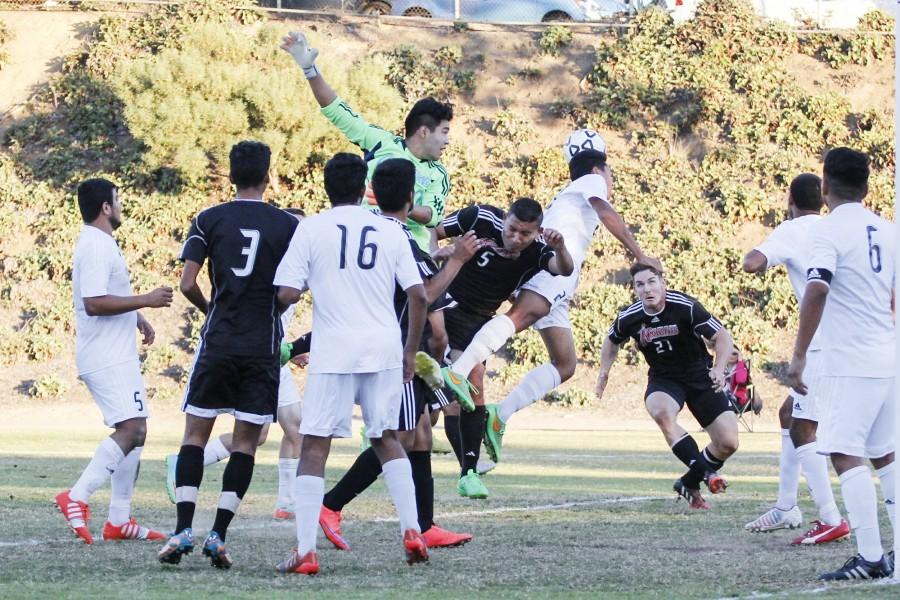 The Knights faced the Cuyamaca Coyotes in their last game of the season, losing 4-2 at home, on Nov. 13. They ended the season placing third in the Pacific Coast Athletic Conference. Both teams played each other again in the first round of the SoCal Regional playoffs on Nov. 21 at Cuyamaca College, where the Coyotes defeated the Knights yet again, 2-1, moving into the second round of the playoffs. Photo credit: Celia Jimenez

The round 1 playoff game of the Men’s Southern Region between the Cuyamaca College Coyotes and San Diego City College Knights on Nov. 21 was a heavily disputed game that saw Cuyamaca win in the last minutes. The possession of the ball, referee’s calls and even the goals were fought at every instant.

“Both sets of players were really nervous,” Coyotes Head Coach Brial Hiatt-Aleu said. “It came down to who was going to execute one extra play and that was the team that decided the game.”

The tone of the entire match was set since the first minute. The match started with every team constantly struggling to take possession of the ball and of the game. One team would attack and the other team would rapidly counterattack, and that’s how the first goal happened.

As Cuyamaca College was attempting to get the ball in the city goal, Knight’s left midfielder Didier Hatungimana, ran with the ball passed it to Francisco Contreras which he passed it back to Hatungimana away from the defense, and City had the lead.

Every ball caused a brawl, whether outside of the field or inside. At every call from the referee players from both teams argued with him to call on their side. The coaches were no exception as they themselves, especially Knights Head Coach Milton Hidalgo would attempt to get the referee to call on his side.

As the first half was reaching its end Cuyamaca had the ball. They lobbed it over the defenders and the ball was in the air. Two heading passes from the Cuyamaca players and the Knights’ goalkeeper left his box and attempted to secure it, but yet another header from forward, Diego Ornelas, over the goalkeeper tied the game.

The game continued with intensity as it was a very give and take match. Such as when Cuyamaca’s midfielder Luis Barajas tackled City’s defending midfielder Cyrus Huxford and was punished with a yellow card.

Such was the intensity that Pedro Carvantes, a mechanical engineering major student from San Diego State University, watched the game and shared, “It was a scrappy game, but entertaining.”

The second half came about with more excitement and more aggression from both teams. The second half needed to be constantly stopped because of fouls from both side. Cuyamaca College returned in this half adding more pressure with the referee and arguing at every call.

The aggression continued. Barajas and Huxford disputed another ball and once the ball landed on the floor, both players tackled each other and threw some kicks at each other and not the ball, which saw them both kicked off the game.

Both coaches attempted to make up for the reduction of a man with more ferocity, as they both increased their fouls, and risky plays.

Cuyamaca was able to score toward the end of the first half and were about to do the same deed at the last 10 minutes of the second half. It was through a throw in that Cuyamaca was able to reach the ball near the Knight’s goal. The ball bounced on the box and Isahi Morales heads the ball to the left corner of the goalkeeper and scores.

Throw-ins were something that the Knights had attempted to fix.

“We were concerned with the throw-ins, and unfortunately the ball bounces the way it does but hey, it’s what it is,” explained Coach Hidalgo.

City College attempted to score in the last minutes and even pushed the entire team forward, but the disappointment of having been scored on kept them from scoring one last goal. The Coyotes’ won the match.

“I know I felt like we could have won, we could have done a little bit more. Overall it was a good game and I feel proud of my teammates,” revealed Knights Captain Francisco Contreras.