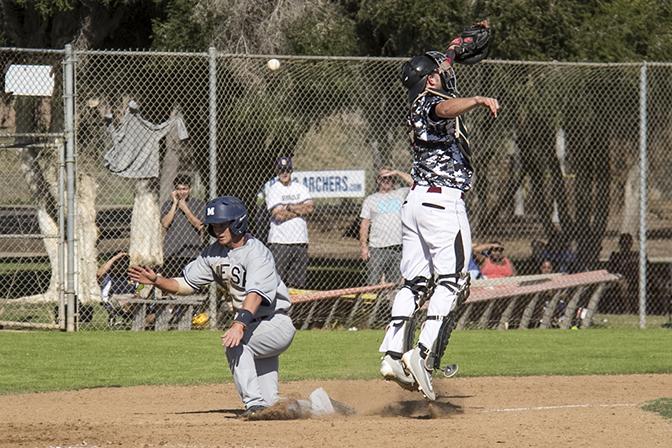 Sophomore infielder Alex Emerick (left) and freshman catcher Wyatt Logan (right) battle to get first to the home plate. Emerick hits first and scores the sixth run for the Olympians during the ninth inning at Morley Field on Feb. 27. Photo credit: Celia Jimenez

The Mesa College Olympians defeated the City College Knights 6-5 in their first Pacific Coast Athletic Conference game of the season.

Mesa (5-7) scored in the top of the first inning but the Knights came back in the bottom as sophomore Tyler Flores hit a triple to center field and scored on a ground out by freshman Diego Blanco.

In the bottom of the second, starting Knights pitcher Frank Lopez helped his own cause with a lead-off triple. Scoring in the next play, the Knights advanced the score 2-1.

Knights’ freshman outfielder Austin Ellery started the bottom of the fifth off right with a bomb hit to left center. Running fast around the bases, he slid safely into third base. Sophomore Scott Martinez followed with a hard hit single to the left side of the field, allowing Ellery to score.

During the bottom of the eighth, Flores started the inning with a single to right center. Sophomore Dylan Dudley was then walked followed by sophomore John Salda, who was hit by a pitch.

With the bases loaded, Lopez came up to bat and hit a short fly ball in between second and right center, advancing Flores. The score was 5-4 Mesa.

With only one out, freshman Anthony Warneke hit a sacrifice fly ball to center field allowing Dudley to score and tie the game 5-5.

In the top of the ninth, Mesa’s Alex Emerick earned a walk but managed to get to third base on a wild pitch and throwing error. Emerick scored the winning run on a sacrifice fly by Alex Eliopulos.

The Knights are now 5-5 overall in the season. They play their next three games on the road, starting with Imperial Valley College on Wednesday, March 3; at Grossmont on March 5, and at Southwestern on March 8.