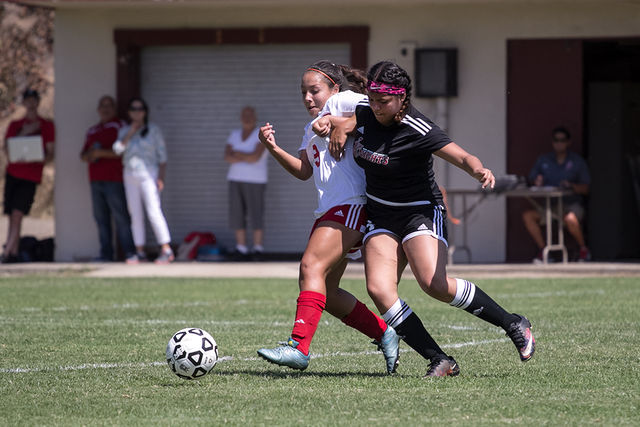 During the first half, the Dons played mostly on the Knights’ half, with City’s team having to defend their goal.

The Dons’ attack started early, with freshman forward Lizbeth Gonzalez having a shot on goal, which was stopped by sophomore goalie Lisa Garcia

The Dons dominated possession. Santa Ana kept stopping City’s attacks and forced them to retreat and defend their midfield and penalty area.

During the 20th minute, Gonzalez evaded the defenders and scored, putting the Dons on the scoreboard. This goal rattled City College and Santa Ana was able to score two more goals in less than four minutes.

After this, the Knights stepped up their game but the Dons stopped their attacks and scored two more goals.

Towards the end of the first half the Knights mounted an effective attack and freshman forward Mariah Estrada scored for City College.

The first half ended 5-1 in favor of the Dons.

At the beginning of the second half the Dons surprised the the Knights and scored their goal number six.

The Dons kept up their offense, with the Knights defending their area.

The Knights’ defense was able to stop several attacks but some of them ended in corner kicks keeping the opponent near their goal.

The Dons scored three more goals and the match ended with a 9-1 score.

Last season the Knights were short of players, with only 17, and played about half of the season with 14 due to injuries.

Knights lost 18 of the 21 games they played, and had a poor turnout.

“We learned our lesson,” said Andi Milburn, the Knights head coach. The team has 24 players this season.

Milburn stated they have work to do to improve their playing skills.

Milburn said that, despite falling on their opening game this season, the team will have better results this time around.

“This team has a lot more cohesiveness and they are more willing to work harder. Last year year we had some real solid players but the attitude wasn’t as positive.”