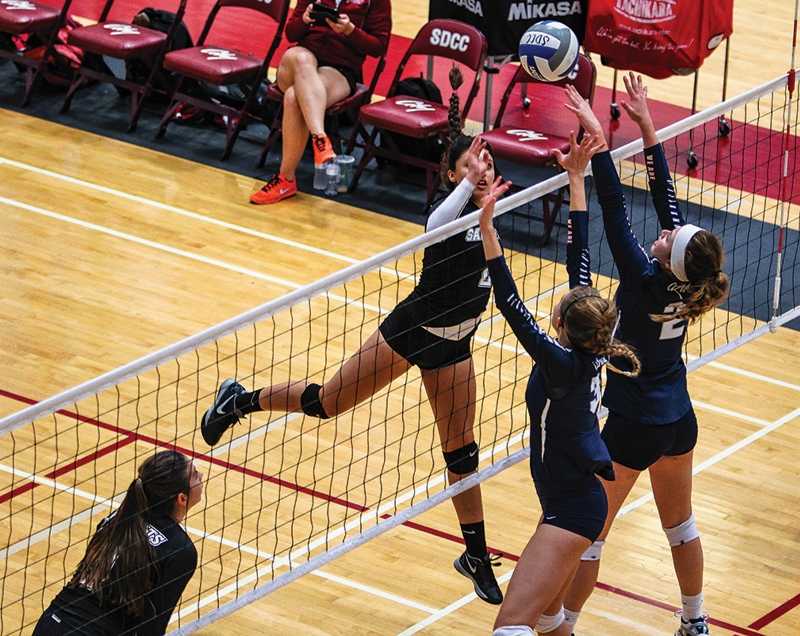 Knights outside hitter Lysette Serna goes up to tap the ball over the defenders from Pima Community College during the volleyball tournament Sept. 24 at West Gym. Photo credit: David Pradel / Newscene Contributor

The Knights women’s volleyball team is on a roll.

On Sept. 24, the team won the the San Diego City College Tournament. Two days after that a player pivotal to winning that competition, outside hitter Chloe Gruwell, was named one of two Pacific Coast Athletic Conference Women’s Athletes of the Week.

The Knights team, with a record of 7-5, next plays on the road against Long Beach on Oct. 5.

The women came into the City College tournament with a 4-4 record, but demonstrated that the team is a force to be reckoned with this season.

“Once they get to that flow level, we are going to be unstoppable,” Knights head coach Dede Bodnar expressed. “They’re just doing great. I’m happy with all of them.”

The team had a strong showing in the first round of the tournament. They won two out of the first three matches, beating the Cuyamaca Coyotes and the Chaffey Panthers — both in three sets.  Gruwell was outstanding in the opening sets.

Gruwell helped propel the team to victory as she led the Knights in kills in both games with 11 against Cuyumaca and 9 kills against the Panthers.

Not only that, shel also managed to serve up 7 aces in the first match, followed by 6 aces in the next match against Chaffey.

Taylor Page, who plays outside hitter as well as opposite hitter for the Knights, also had a strong performance in those first two matches, with 8 kills and 2 service aces in the first match, followed by 9 kills and 3 service aces against Chaffey.

However perfect they were in the first two matches of the tournament, their third match, against the Pima Aztecs, proved to be a lot more work. Things looked grim for the Knights as the Aztecs had jumped out to a 2-0 set lead in their match-up.

Going into the playoff round, the Knights knew thet had to shake off that heartbreaker against the Aztecs.

In their playoff match, the Knights managed a 25-19 win against the Chaffey Panthers and advanced to the championship match, where the women’s team would get another chance to try and defeat the Aztecs.

This time around the Knights took the rematch 25-17 and became champions of the second tournament they play this season.