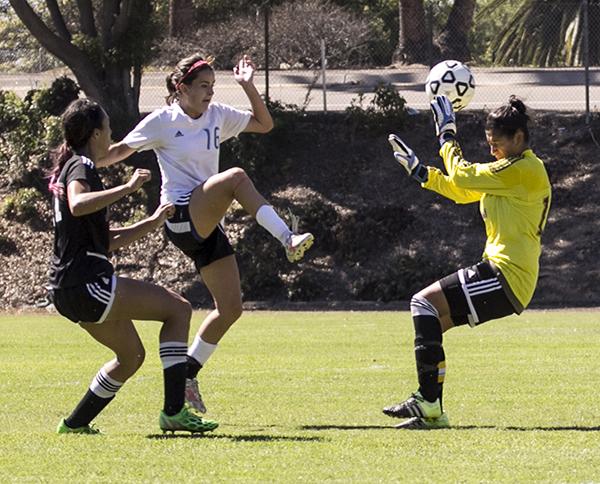 The City College women’s soccer team continues to struggle this season.
On Sept. 30, the team lost 1-2 to the Cuyamaca Coyotes at City College’s soccer field.
After the game, Knights Head Coach Andi Milburn showed her disappointment and said that the team had given away some victories, including the just-conluded match.
As of Sept. 30, the Knights have won one game and lost eight.
Neither Milburn nor her assistants would comment further about the game and their team’s performance.
During the first minutes of the game against the Coyotes, both teams moved the ball across the field and had some shots on goal that were unsuccessful.

The Knights broke into the left side of Coyotes defense and freshman forward Aunica Abbott scored the game’s first goal at minute 10.of the first half.
Cuyamaca was better at sending passes and recovering the ball.
Cuyamaca freshman forward Kayla Kinney played aggressively and City’s players had a tough time overtaking her and blocking her .
Kinney got a pass from the center of the midfield and neither Knights freshman defender Dulce Castillo nor sophomore midfielder Felicia Valenzuela could stop her.
Kinney shot on goal and scored for the Coyotes, tying the game 1-1.
During the second half both teams were pressing and the Coyotes almost scored after a few minutes.
Kinney intercepted a pass and drove it forward, overtaking freshman midfielder Mariah Estrada. She shot on goal but sophomore goalie Lisa Garcia stopped it.
Cuyamaca freshman forward Elizabeth Guerrero-Diaz reacted quickly to Garcia and shot on on goal but it bounced on the crossbar. Guerrero-Diaz tried a second time but the ball died at the hands of the Knights goalie
A few minutes later Kinney attacked again. Garcia stepped out of the goal area to block Cuyamaca’s forward. Despite this, and Valenzuela’s defense, Kinney managed to score.
During the last 10 minutes of the match, the Knights stepped up their attack and started to bombard the Coyotes with shots on goal but never managed to score again.
This was the Coytotes’ first win of the season.
“We played for the first time, how (we) should be playing,” said Jennifer Tomaschke, Cuyamaca’s head coach and former Knights assistant coach.
The next home match for the Knights s is on Oct. 7 again at Mount San Jacinto at 3 p.m.