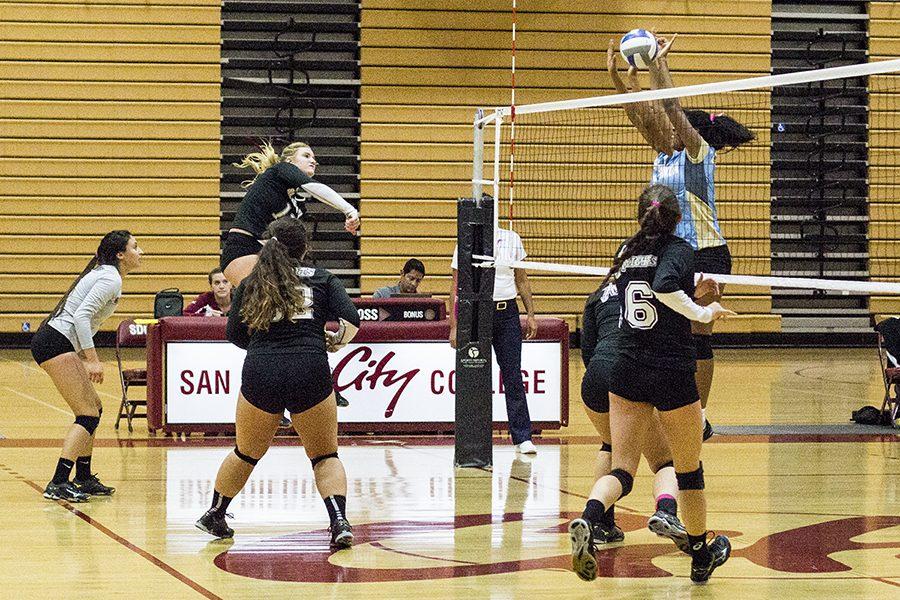 The Knights opened the first set with a 10-5 lead using excellent teamwork and communication. Cuyamaca showed grit and fought back to take a 24-23 lead but the Knights kept their composure and won the set behind the strong play of outside hitter, sophomore Chloe Gruwell.

During the next two sets the Knights maintained their unselfish play to defeat the Coyotes in a sweep.

Cuyamaca College (1-10) showed some heart by battling back from large deficits throughout the match. The Knights talent proved to be too much for the Coyotes to handle, though.

A trio of players assisted in the win, with 10 assists each. Sophomores Hannah Robles and Megan Kronschnabel and freshman Breanna Reid all put their passing skills on display for the home crowd.

Sophomore Gruwell put on a show, taking advantage of the Coyotes with 13 kills, 20 digs and five service aces, scoring a total of 18 points for City College.

Gruwell, who leads the Pacific Coast Athletic Conference in service aces per set, wasn’t satisfied with the win, though.

She said the team needs to “finish faster and harder” to put away sets. “We need to focus on not letting balls drop.”

Coach Dede Bodnar was happy with the win but didn’t lose sight of the team’s next challenge. “We need to protect our court and have more of a never-die attitude and play a lot more with heart.”

The Knights have won five of their last seven and improve their record to 8-6 and look to build on their success on Wednesday, Oct. 12, at Harry West Gymnasium against Imperial Valley College. Game time 5 p.m.

The Knights will have their hands full as they go up against Imperial Valley College’s No.3 ranked PCAC player, freshman Megan Lerno.