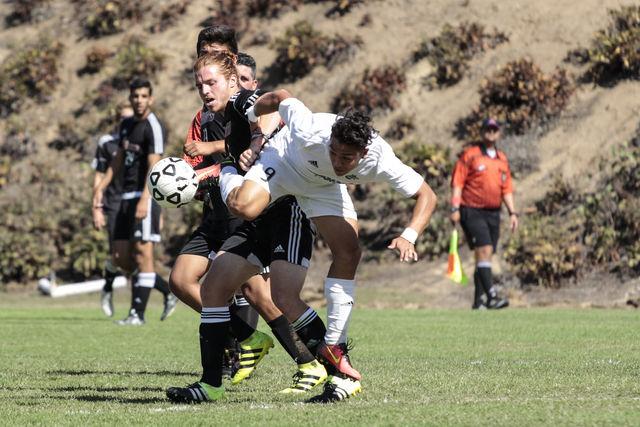 The last week has been a rollercoaster for the Knights men’s soccer team.

On Oct. 7 the team scored a last-minute goal and won the match 2-1 against the Cuyamaca Coyotes at City’s soccer field. The Knights stretched their undefeated streak to 11.

“We played smart, ” Knights Head Coach Milton Hidalgo said after the win. He recognized the Coyotes had played faster than his team and said the Knights needed to step up their game.

“We need to possess and be a little bit quicker. We have to able to play and match that speed of play,” he said.

Four days later, the Knights stumbled against San Bernardino, losing by the widest margin of the season, 1-5. The loss gives the Knights an overall record or 7-2-4, and 5-1-2 in league play.

The Knights next play a road game against the Palomar Comets on Oct. 14.

The match against Cuyamaca was intense from the start, with the ball traveling to all parts of the field.

Cuyamaca was quicker on its attacks and ball recovery.

The first goal of the match came at minute 20, when three Cuyamaca players got into the penalty area ambushing City’s defense and shooting on goal. The ball passed through the hands of sophomore goalie Jorge Calvario and into the net despite freshman defender Gerardo Lopez’s attempt to stop it..

Afterward, the game intensified and it was evident the Coyotes were dominating. Cuyamaca took more shots than the Knights in the rest of the first half, with Calvario, Knights’ goalie, making several saves.

The first half of the game ended in 1-0 in favor of the Coyotes.

The second half was more intense than the first, Cuyamaca wanted to score another goal to widen its advantage while City was looking to tie the game.

Sophomore forward Francisco Contreras got a pass from freshman forward Sol Griffin after battling the Coyotes’ defense, in a crowded penalty area, he shot on goal. The ball stopped right before the goal line and in front of a freshman defender, who missed a clear goal opportunity for the Knights.

In a move that took Cuyamaca by surprise, the Knights tied the game with a goal from sophomore forward Contreras.

After the goal, the Coyotes stepped up their game. The Knights struggled but were able to stop them around the penalty area and when Cuyamaca took a shot, it ended in Calvario’s hands.

It seems the game would end in a tie, but the Knights showed otherwise.

City took advantage of Cuyamaca’s open space and Contreras sped past the Coyotes’ defense. He laid off a pass, which went to Lopez, who scored for the Knights at the 90th minute.

The game ended a 2-1 in favor of the Knights.

“We didn’t finish a lot our scoring opportunities,” Coyotes’ Head Coach Brian Hiatt Aleu said, referring to his team’s missed opportunities. “Unfortunately, in (soccer) it’s about scoring goals not about the chances you create.”