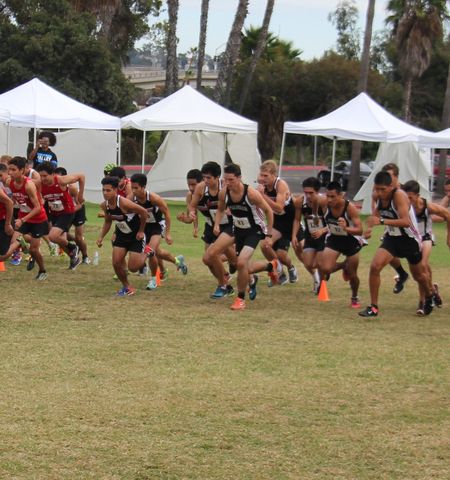 The City College men’s cross country team had their strongest showing of the year on Friday, Oct. 28, as the team placed fifth out of ninth in the Pacific Coast Athletic Conference championship.

The team scored 128 points, led by Ishmael Fernandez-Mata, who had 21 points. The Knights qualified to go to the SoCal regional meet on Nov. 4 at Irvine Regional Park.

The Knight’s first five runners to finish placed in the top 30, earning them a bid to the tournament.

San Bernadino Valley College had the best showing at the race, as they had runners from their men and women’s teams, Luis Ortega for the men. and Alyssa Hebb for the women, take the top spots in the Oct. 28 race.

The team that the Knights should look out for is the Mesa College Olympians, as they placed right behind City. The Olympians scored 158 points, 30 points behind the Knights. In fact, Mesa’s top runner, Cesar Palomares, finished four places ahead of Fernandez-Mata, taking the 17th spot.

That’s what the men seem to be doing as they look to be a team on the rise going into the regionals.

On the other side, the women’s cross country team  placed last in their championship race, earning 230 points. However, the team is a new one and are improving with each race.

“We put our best foot forward. I think they’ll be proud of the season they had,” women’s coach Marco Anzures said, “We’ll be successful as a team.”

Despite finishing last, the team has many bright spots. One of them is runner Viridiana Ayala, who was City’s first runner to finish and took the 36th spot in the race overall.

This is her best race of the season and it’s the first time she finished ahead of all her teammates. When asked how she felt about theseresults, she said, “It’s still kind of hard to believe. I’m just trying to take it all in.”