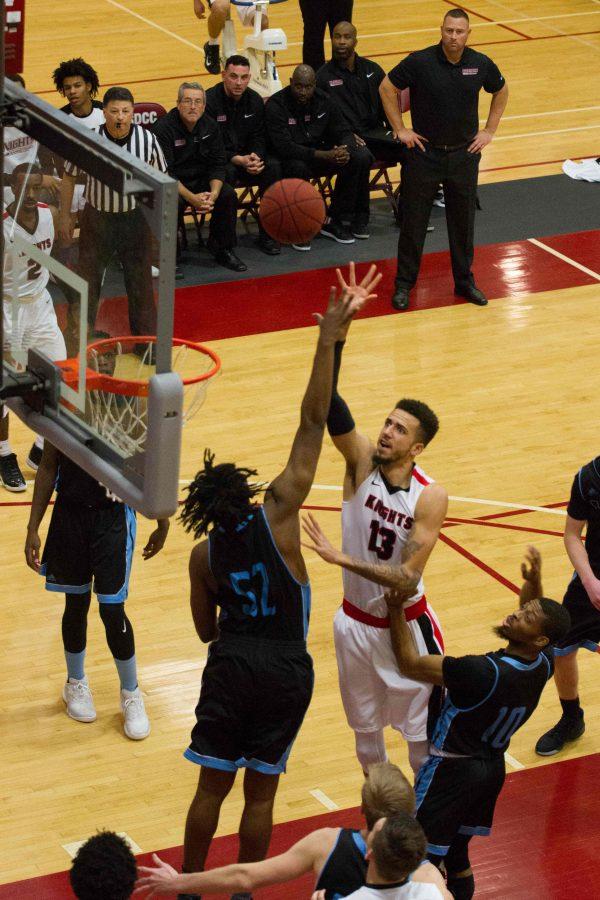 Knight's sophomore center, Alex Wilbourn, attempts shot with pressure from the Cuyamaca Coyote's, Robert Harris, during the second half.

The City College men’s basketball team added another win Feb. 3 against the Cuyamaca Coyotes, 91-53. This extends the Knights’ win streak to 8 and marks their 3rd straight game in which they beat their opponent by at least 20 or more points. “We’ve got these guys to compete really hard every day and it carries over to the games,” Knights coach Mitch Charlens explained.

This win is also City’s largest margin of victory, a 38 point difference, since their 118-78 rout against L.A. Southwest Palomar which the team won by 40 more points.

Sophomore guard, Romario Wilson, lead the team in scoring against the Coyotes as he put up 13 points for the Knights. Wilson also had 3 rebound and 2 steals in the game and played for 19 minutes which is tied for the most minutes on the floor that night with teammate Jahmere Mitchell. Freshmen forward, Darius Lee, was a force on defense as he lead the team with 7 steals and had a solid amount of assists with 6. Lee finished the game scoring 5 points.

City’s next match-up is an away game on Feb. 8 at 5 p.m. while also being a rematch against the Grossmont Griffins. The last time these two teams met, the Knights took the win 82-51. It was a game in which Romario Wilson was the leading scorer of the entire night with 18 points.

When asked about the upcoming match-up coach Charlens explained, “It doesn’t matter if our record is good and theirs may not be great. They’re all good teams and they all wanna beat us.” The Griffins are going into the game with a 12-11 record, but they have been hot recently as they are currently on a win streak of 4.

City College’s next home game will be against the Southwestern Jaguars on Feb. 10 at 7 p.m.