Knights in state championship for first time in history 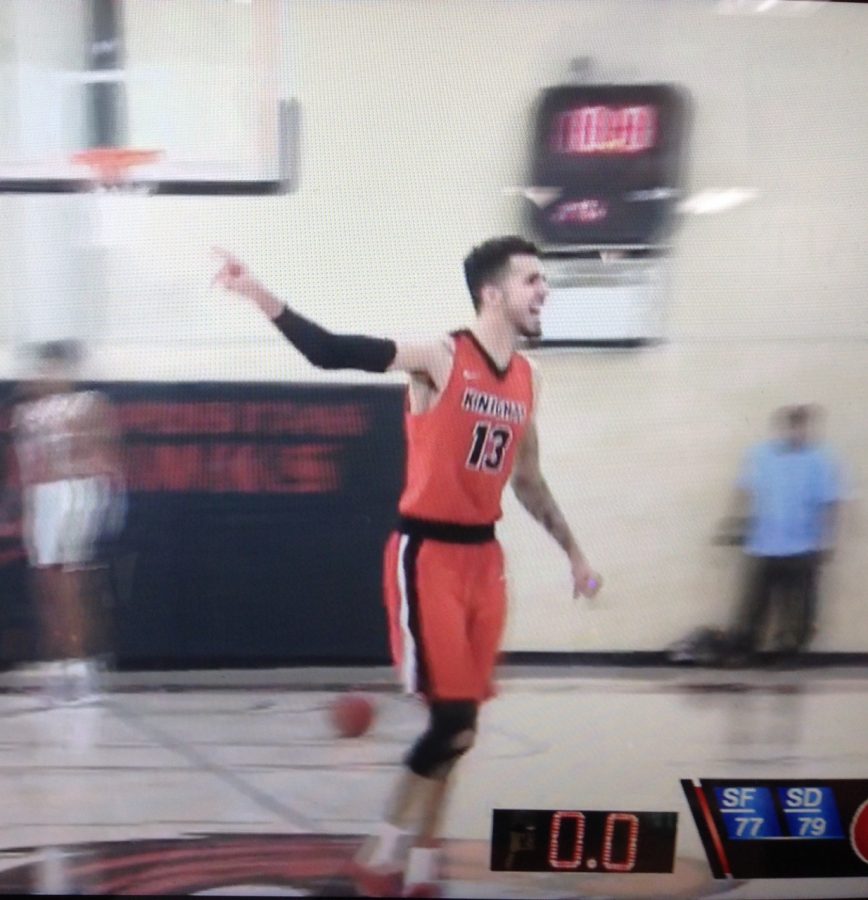 Knights sophomore center, Alex Wilbourn, celebrates the Knights moving on to the state championship, this Sunday, March 12 at 1 p.m.

San Diego City College is headed to the junior college basketball state championship for the first time in the school’s 100 year existence, to face the Fullerton College Hornets on Sunday, March 12 at 1 p.m.

They barely made it to the final round as they almost fell to the San Francisco City College Rams on Saturday, March 11, but pulled off a miraculous 15 point comeback to win the semifinal matchup 79-77. The trip to the state championship is the first in Knights history and San Diego now has their best record ever recorded.

Despite not playing up to their potential, the Knights were only down 10 at halftime. Then the second half began and the Rams jumped out to a 15 point lead and the light at the end of the tunnel was beginning to fade.

That’s when Knights freshman guard, Wonder Smith began to show why he was so highly recruited by San Diego, as he went off in the second half for 14 points while nailing two clutch 3’s, one of which gave the Knights the lead for good with 2:06 remaining, putting the Knights on top by one point. Smith finished the game with 17 points, four steals, and three 3-pointers.

Knights sophomore guard, and Pacific Coast Athletic Conference Player of the Year, Darien McClain didn’t bring his A game, but it was enough, as he rattled in 15 points on 4-11 shooting, and 6-7 free throws. Sophomore center, Alex Wilbourn, scored nine points but his true contribution came on the defensive side as he made a handful of key plays down the stretch to hold off the Rams comeback attempt.

On the other side of the ball, Rams sophomore guard, Zach Copeland was a force, hitting six 3 pointers that always seemed to come when San Diego City was gaining ground. Copeland finished with 28 points and seven rebounds but it wasn’t enough to beat these Knights on this day.

The CCCAA state championship game is on Sunday, March 12 at 1 p.m. and it will pit familiar foes against each other, as the Knights fell to the Fullerton Hornets in the SDCC Tourney final 76-65 on Nov. 6. The Knights are a different team now, winners of their last 16 straight and firing on all cylinders to give San Diego a real shot at their first state championship in school history.

The game will be live streamed on socalcollegesports.com. Game time is 1 p.m.