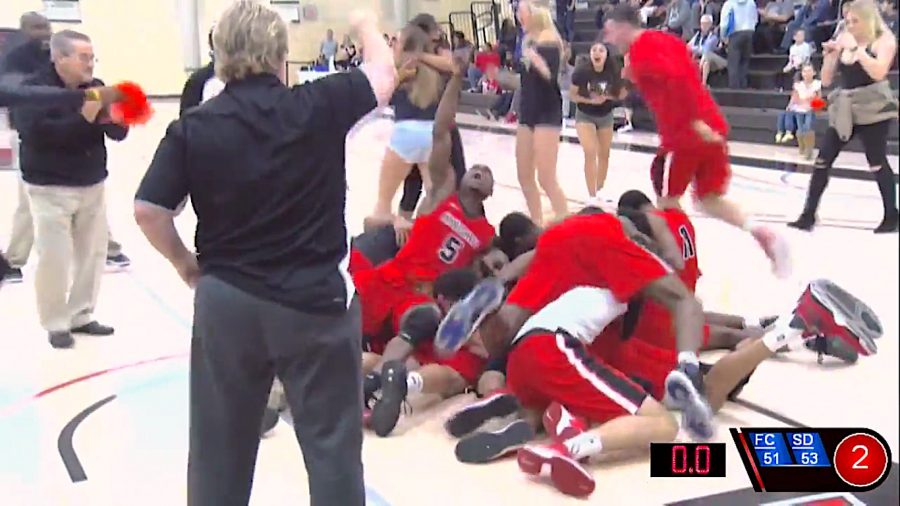 With just over four seconds remaining, Knights sophomore guard, Darien McClain was given a chance to win the game for his team with one shot. Driving the full length of the court, McClain did just that and nailed a beautiful floater in traffic and at the buzzer to hand San Diego City College its first California Community College Athletic Association men’s basketball  championship in school history, 53-51, over the Fullerton College Hornets (26-7) on Sunday, March 12 at Las Pocitas College.

With the score tied Fullerton had a chance to go up, but sophomore guard, Nick Anderson got called for traveling which gave the Knights the ball back with just 4.1 seconds remaining in the game, giving McClain all the time he needed.

“That last play with Darien, four seconds left, my assistants were telling me to call a timeout to get the ball at half-court,” said Knights Head Coach Mitch Charlens to a CCCAA reporter. “He’s so fast. I knew four seconds- I even told him four seconds is enough to get to the rim and he did,” Charlens further explained.

The Pacific Coast Athletic Conference player of the year, McClain, was voted this year’s CCCAA tournament’s Most Valuable Player and was voted onto this year’s All-tournament team. The 5-9 guard had 11 points, seven rebounds, two assists, and a steal.

“They let me through,” McClain said in his post-game interview. “”They should’ve picked me up. Yes, I was touched on the layup, but I’m glad I made it so I didn’t have to put it in the hands of the refs.”

The Knights cruised their way through the early going, jumping out to a 13-3 lead, but Hornets big man and All-tournament selection, freshman forward, Kendall Lauderdale put his team on his shoulders to bring the Hornets back to within one at half-time. Lauderdale finished with a game high 17 points and 11 rebounds. San Diego led, 29-28, at the break.

Fullerton had a 9 point run midway through the second half, taking a 45-38 lead with 7:07 left, but the Knights once again showed their grit in this tournament by erasing the deficit with solid defense and high basketball I.Q.

It was a long season of hard earned victories for the Knights and now they can call themselves champions for the rest of their lives.  Stay tuned for a full-season review in City Times’ upcoming issue.