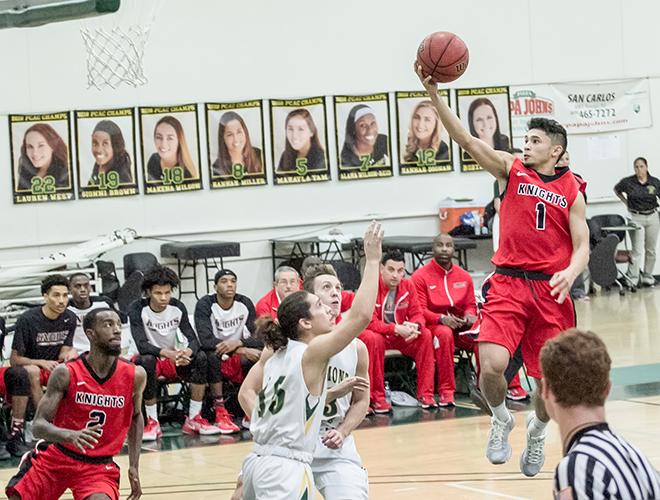 A 19-year-old who grew up in Saint Louis, Missouri has changed the path of the San Diego City College Knights men’s basketball team in just one year and 4.1 seconds.

Darien McClain is a quiet, humble guy who is also a star sophomore point guard at San Diego City College.

The Mesa College Spartans were his first choice to play for, but he changed his mind during the summer after meeting Knights players who invited him to try out for the team.

He liked the environment, the coaches and the players, so he decided to stay. “All the players invited me in,” he said.

Before the season started, McClain took time off from work to make a bigger commitment to the basketball team.

“From day one we had a goal, and it has come to a moment in which we have to stick to our word and keep going,” McClain said before going to the California Community College Athletic association (CCCAA) state tournament.

His decision paid off. The team had its best record in City College history with a 31-5 record.

The Knights also won their first state title, which was the first for San Diego county too. McClain said it never crossed his mind they could lose the state title but he knew “it wasn’t going to come easy.” He added that at some point “it was going to click for us, and it happened at the end of the game.”

McClain earned his title as the MVP twice this season. The first one was in the Pacific Coast Athletic Conference South, and the second one during the CCCAA state tournament.

With only 4.1 seconds left in the game, he raced the length to the other side of the court and scored the winning bucket for the Knights. He untied the 51-51 score against the Fullerton Hornets on March 11 at Las Positas College in Livermore.

“When I got the ball, it was a wide open line to the rim, so there was no need to pass it. It was my time to go,” McClain said about the incredible buzzer beater that blew away the audience and the opponent.

“It is a shame we only had him for one year,” said assistant coach Joe D’Ambro. “He really enjoys being on the floor and being part of our program, and I think it is reflected on how comfortable he feels on the floor, and the success he had all year.”

The San Diego MVP is humble about his high caliber season. “My teammates were a big part of my success here. They are willing to sacrifice their scoring and their opportunities to help me out,” McClain said.

“He is a leader on the floor,” said teammate Robert Taylor, and he added that McClain guides and communicates well with them on the court.

McClain started playing sports when he was about 5-years-old following in his parents footsteps.

Playing sports runs in the family and his parents have been very supportive of his athletic career, McClain said. They both played sports in college; his dad was a basketball player and his mom a soccer player.

When McClain was at O’Fallon Township High School, he played  basketball and soccer. He was captain and won the regional championship on both teams.

One aspect he integrated from soccer to basketball was endurance. “I feel I can run forever,” McClain said.

After high school, McClain had to make a tough choice and pick one sport for his college years. The decision wasn’t easy and it was made at the last minute.

Many were discouraging him from pursuing basketball, he said to The Union Tribune, because they thought soccer was a better fit. But in the end, he decided to follow his passion.

He moved to Tampa, Florida and played for the Tampa Spartans.

During his freshman year, he only played 17 games and his highest score was 13 points during a game against Eastern New Mexico on Dec. 20 2015. He also was a key player against  Puerto Rico-Bayamon on Nov. 28 the same year.

With the Knights, his highest score was 39 points against the Riverside City College Tigers where the team won 113-81 and their place in the state tournament. He started 30 out of the 34 games and garnered 55 steals and 114 assists this season.

“He is a fantastic shooter. He is really, really fast,” said McClain’s teammate Jaire Roberts. Roberts thought McClain was good but said, “but I didn’t think he would get this crazy.”

McClain is 5-foot-9 so he is not a big, tough-looking dude. Sometimes he is underestimated and he takes full advantage of it. He always looks for open spaces, jumps very high and is able to score 3-pointers far away from the 3-point line.

During the games, McClain cemented several 3-point shots, effortlessly making it look like a piece of cake. But of course it took work.

Freshman guard Wonder Smith went with McClain every night to the court to master the 3-point shot. “We put about 300 or 400 shots,” he said.

The championship has put McClain and his teammates in the spotlight at school and on local news. For McClain it has been “a crazy experience.” he wasn’t expecting to get all this attention.

Now that he’s back in town, he is focusing on academics, keeping up with his classes, homework and his 3.0 GPA.

His favorite player is Stephen Curry. “I feel I want to be a shooter just like him,” McClain said.

McClain said he would like to play basketball professionally and said, “I will do whatever it takes.” But before embarking on this path, he said he plans to transfer and finish his college education.