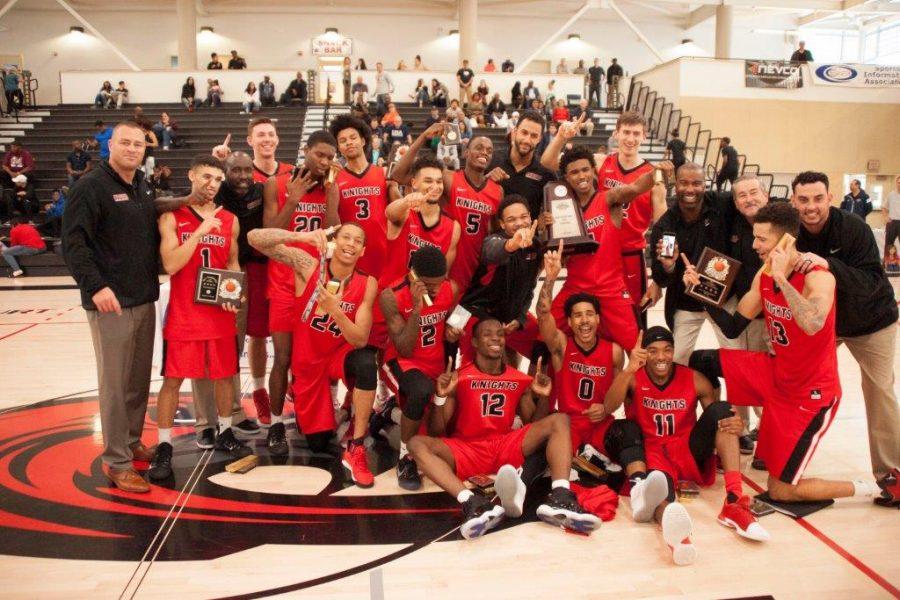 The 2017 Knights mens basketball team are the first in San Diego history to win the state championship.

You may have missed it, and if you did I am truly sorry for you, but your City College Knights men’s basketball team just made history in a most epic fashion.

On Sunday, March 12, the Knights put the finishing touches on what was the most magical season on record for all of San Diego, by winning the 2017 California state championship for the first time in school history and district history. No other team in all of the community colleges in San Diego has ever won state. Your Knights are the first.

The road was a difficult and the end of the journey left the team with a feeling of surrealism almost beyond words. Knights head coach Mitch Charlens described it this way. “It was unreal. Only one team gets to win the final game each year. It just doesn’t happen,” Charlens said. “It doesn’t matter how good of a coach you think you are; it doesn’t matter the group you have; it doesn’t pan out that way, especially on a last-second shot to get it done.”

The Knights started the state tournament down 11-0 to Yuba College, but the Knights players were never rattled. Coach Charlens will tell you that it was just the makeup of his team. But truth be told, he put his team in a mindset throughout the season always to stay together and face adversity and, despite the circumstances, never to point the finger. This attitude kept up all the way to the Knights’ improbable comeback victory on a last-second coast-to-coast layup by sophomore point guard Darien McClain against Fullerton in the state final.

The Knights’ coach was not the only one who was honored by the PCAC. McClain was named PCAC South Player of the Year and California Community College Athletic Association state tournament MVP. He averaged team-bests in scoring (10.7), assists (3.5), steals (1.7), and led the team in free throw percentage (85.6). Six other Knights were also named to the All-PCAC South team along with McClain, including freshman guard Wonder Smith and sophomore guard Romario Wilson who were selected to the All-PCAC first team. Freshman forward Robert McCoy and sophomore center Alex Wilbourn were named to the second team. Sophomore guard Marcus Brumsey and sophomore guard Jahmere Mitchell earned honorable mentions.

Don’t let these players’ slightly diminished stats fool you, though. The lower-than-expected numbers were not due to an inability by the Knights team. More accurately stated, it is a testament to their willingness to buy into Coach Charlens’ system. “Our whole team could’ve gone to any other college and played over 30 minutes a game and they could’ve been the star, and I asked them every day to sacrifice and I said it will be worth it in the end when we accomplish something great,” explained the Knights coach. “Most of the year, I don’t think guys played more than 20 minutes a game. So their stats didn’t look like other kids at other colleges, but they’ll never have the experience that they had.”

Now that they are state champions, Knights players are being recruited by colleges from all over the nation. Every sophomore will be taken care of and be able to move on to the higher level. “When you win it all or win at a high level, even then when we didn’t win it all (2009 team) we had guys that averaged three points a game but they still got full ride scholarships,” explained a proud Charlens.

Legendary basketball coaches like Hall of Famers Lute Olson and Jerry Tarkanian are a couple of other names found on the list of California community college state champions that now includes Mitch Charlens. But don’t expect this San Diego native to move on to a bigger, more reputable school just yet. “I’m from San Diego. I was born at Mercy Hospital downtown. I’m born and raised in San Diego. I’m representing San Diego and we just brought the title here. I’m thrilled to be here,” said a determined Coach Charlens.

So it’s okay, City College. You can breathe a sigh of relief because Coach Charlens will be here for years to come, and we expect the winning ways at our school will continue as long as he is at the helm.